“The most important thing right now is the drought, but of course that is going to be solved with rain,” he said in one of his first interviews after the elections.

“The greatest threat we have is an overreaching federal government,” Miller said. “Whether it be the (Environmental 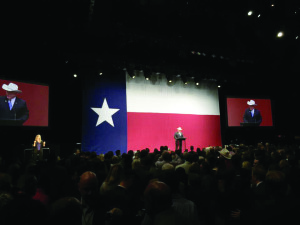 Protection Agency) trying to force their water laws on us, or the  (Bureau of Land Management) trying to take land away from farmers and ranchers up on the Red River, I will continue this fight against an overreaching federal government.”

Nov. 4, 2014 marked the night when the second ever Tarleton alum was elected to statewide office. The first was Ben Barnes, who served as lieutenant governor from 1969 to 1973.

As a native of Comanche County, Miller grew up with agriculture as a large part of his life. From very early on he enjoyed being outdoors and dealing with the agricultural environment. Miller gained a degree in agriculture at Tarleton in 1978 and went on to teach agriculture in high school after he graduated. He owns and operates Miller Nursery in Stephenville. He served in the House for 12 years, eventually making his way up the ranks to chairman of the House Committee on Agriculture and Livestock. Miller said that he learned a lot in his time at Tarleton state.

“I learned to not be late to class,” he said. He also said that Tarleton fully prepared him for the agriculture commissioner’s job. “You know, from my early years growing up in Comanche County, attending Tarleton State University, being a member of the FFA, and getting my agriculture degree certainly prepared me for leading this state’s agriculture economy,” he said.

“I am proud to honor my alma mater and look forward to working with all the good folks there at Tarleton, all of our friends and hometown folks, and all the system’s centers.”