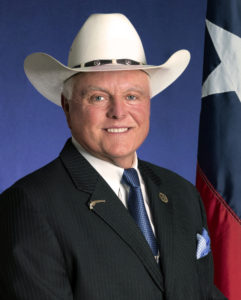 Sid Miller was re-elected the 13th Commissioner of the Texas Department of Agriculture, beating out Kim Olson the Democratic candidate.

During his first term Miller has accomplished re-organizing the consumer protection program, increasing inspections and expanding foreign markets as well as raising fees and battling with barbecue restaurants over their meat scales and gas stations over costs for safeguarding gas quality.

For Miller’s new term he plans to continue to reorganize and modernize the state’s export livestock facilities. There are four in Rio Grande and one near the Houston airport. He plans for these facilities to be reconstructed, reorganized and restructured.

Miller is an eighth-generation farmer and rancher who graduated from Tarleton State University. He was first elected the Agriculture Commissioner in 2014 and he has used his term to rally for President Donald Trump.