Silver Taps is a treasured tradition of Tarleton State University, reinstated in 1989 to represent a never-ending bond between a person and the Tarleton community. The annual ceremony was held on Monday, April 23. The Tarleton community gathered at the Alumni Island surrounding the John Tarleton statue to remember and honor members of the Tarleton family who have died during the previous school year. 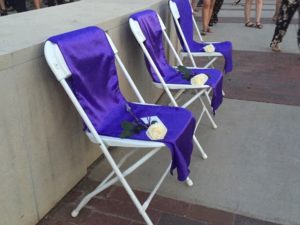 The three vacant seats are draped in Tarleton purple to represent the three enrolled students who passed away this previous year. Their names are James Birdow, Richard Anderson Seth Bowling and Maria Rachel Schmidt. Photo by Nicolette Howe

The ceremony began with the posting of colors presented by the Cadet color guard, as Dottavio delivered touching words of remembrance. He highlighted the lives of the students, faculty, staff, alumni and friends who exemplified Tarleton’s core values by bringing them to life. His speech continued to further explain the significance of the candles and the extinguished flames.

“Families are like a branch on a tree, we grow in different directions yet our roots remain as one and in this case our Tarleton roots,” said Kerby. His speech illustrated the family bond built between the university and everyone who calls it home.

After Kerby’s speech, a Tarleton Corps of Cadets escort brought Tarleton’s flame to Alumni Island where representatives of the deceased and volunteers carried a lit candle and assembled around the John Tarleton statue. 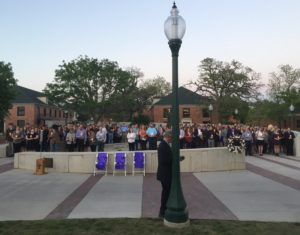 “Your flame will burn with those of others of this great brotherhood and sisterhood until your life has finished and your Tarleton brothers and sisters lay your flame to rest.” Photo by Nicolette Howe.

The ceremony concluded with all candles and flames being extinguished while these following words were read:

“You are the sons and daughters of Tarleton. Your flame has burned long and well with those of this great brotherhood and sisterhood, tonight we remember and lay your flame to rest.”