The loss of a loved one always has a tremendous impact on those left behind. For those who are a part of the Tarleton community, this impact is displayed in a memorial ceremony known as Silver Taps. Since the tradition was reinstated at Tarleton in 1989, the Tarleton community has gathered at the John Tarleton statue every spring to honor the lives of deceased family members. 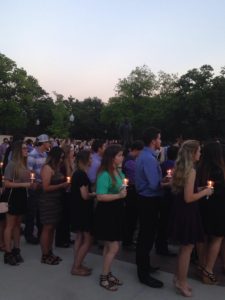 This year’s Silver Taps Ceremony was held on April 22. Photo by Bianca Barajas

This year’s memorial was held on Thursday, April 22 and was presented by the Tarleton Ambassadors, the Texan Corp of Cadets, the Department of Military Science, the Division of Advancement and External Relation, and the Tarleton Alumni Association. With guest speaker Captain Patrick Kerr and words of remembrance by Tarleton President, Dr. Dominic Dottavio, the heartfelt and emotional ceremony proved that once a person steps foot on this campus, a bond is built between the community that cannot be broken, even by death.

The ceremony began with the posting of the colors and a short, but touching speech by President Dottavio, in which he reminded everyone that although the ceremony is a valuable tradition, “it represents much more than a tradition.” 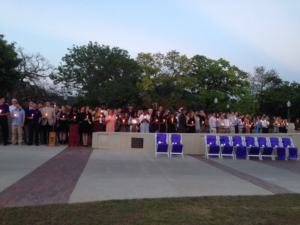 He went on to praise the lives of the students, faculty, staff, alumni and friends, as they exemplified Tarleton’s core values. As his speech continued, Dr. Dottavio explained the significance of the candles and the extinguished flames.

Marissa Pena, the president of the Tarleton Ambassadors, also stressed the flame’s importance in an interview with Texan News before the ceremony began.

“As you come in as a freshman, you light your candle. This is our way of kind of letting your soul rest. We hold a candle for anybody…as long as you were here at Tarleton for a couple of days, your candle will be blown out for us to put you to rest.”

The Ambassadors, advised by Sue Goodman, organize the event, from getting the candles together to gathering the names of the deceased Tarleton members.

As for a personal connection to the event, Pena explained that Silver Taps reminds her that Tarleton is a family. “It gives my heart kind of a peace that when it is my time, my university will remember me.”

After Captain Patrick Kerr’s beautiful speech commemorating the lives of the 60 veterans who were also honored at Silver Taps, the Tarleton Trumpet Ensemble played “Silver Taps” as the Honor Guard delivered a 21-gun Salute to end the ceremony. The solemn procession was followed by the extinguishing flames, carried out by the volunteers who carried the candles that represented the deceased Tarleton members. This was done as the following words were read:

“You are the sons and daughter of Tarleton. Your flame has burned long and well with those of this great brotherhood and sisterhood, tonight we remember and lay your flame to rest.”