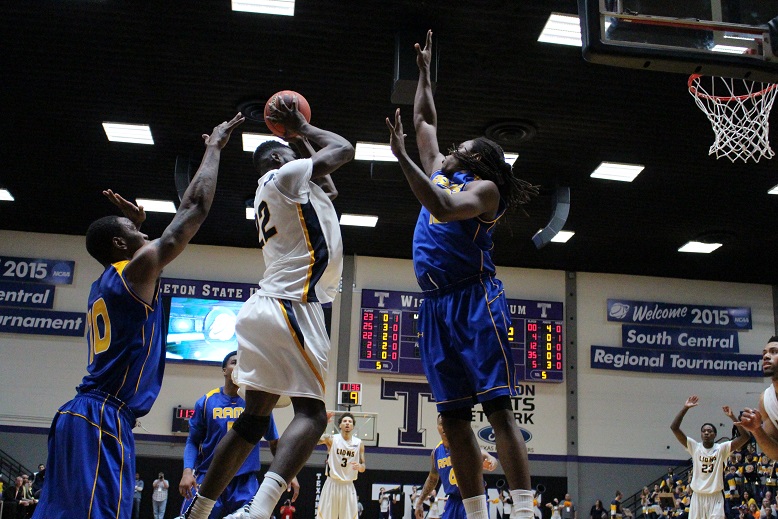 STEPHENVILLE – It was not easy, but the Angelo State Rams moved on to the second round of the NCAA South 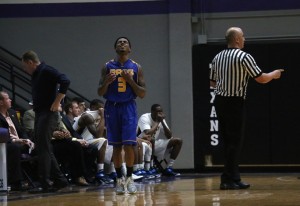 Holden celebrates as Commerce players realize their season is over. Photo by Cameron Cook.

Central Regional at Wisdom Gym in Stephenville. The sixth-seeded Rams took care of business in the second half, and defeated the third-seeded Lions of Texas A&M – Commerce, 85-79.

After being blown out in San Angelo earlier this season, the Lions had won two-straight against the Rams coming into Saturday’s game, including a 68-61 win in last Saturday’s Lone Star Conference tournament championship. The Rams trailed by one-point at the half, but came out firing in the second, going 5-10 from behind the arc and shooting a staggering 60.7-percent in the half.

Holden was the difference maker for the Rams in the second half, going 5-6 from three-point land and scoring 19 of his 22 points. 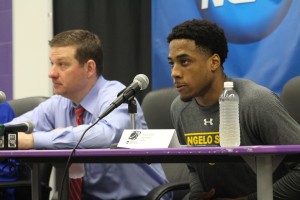 “I probably shot my arm off this week,” Holden said of his shooting performance. “I just wanted to be the most confident guy coming into this game. We’ve been going hard in practice since Monday, and I knew we were going to be ready to come out here and preform.”

Commerce was led in scoring by LSC Player of the Year Darrell Williams and his team-high 22 points. The Rams had nine players contribute in the scoring column, including LaDon Carnegie’s 13 points, and Anthony Adams and Christian Macauley’s 11 points each.

Angelo State will play the winner of (2) Metro State and (7) Midwestern State on Sunday at 5 p.m. in the South Central Regional semi-finals.

The Lions got on the board first after Williams split a pair of free throws. A three by Commerce’s Eddie Leal was sandwiched between back-to-back Ram triples, closing the once five-point TAMUC lead to one, 11-10.

Both teams went cold from the floor for the next two minutes and change. Mayfield ended the Angelo State drought with a lay-up, but failed to convert the and-one opportunity. The basket gave the Rams their first lead, but Commerce answered right back with an easy basket in the lane.

Angelo State went on a 12-2 scoring run to build a nine-point lead, the largest for either team to that point, highlighted by a Kelly corner three. Everrett Pleasant went one for two from the charity stripe, and Williams got an easy fast-break lay-up to close the gap. ASU led 24-18 with under seven minutes to play in the opening half.

The Rams did not go quietly into the half, finishing the opening frame on a 14-6 run and took a 33-32 lead into the locker room. Angelo State’s Raijon Kelly led all scorers with 10 points at the break, while Carnegie and Williams both had eight for the Lions. The first half saw four lead changes, and the Rams out score the Lions 16-4 on second chance buckets. Even with their 12-2 scoring run, the Rams shot a miserably 33.3-percent from the field, while the Lions were shooting at a 42.9-percent clip.

Angelo State scored the first four points of the second half to take their third lead of the game. A pair of Carnegie free throws were followed by Holden’s second corner three of the game for the Rams, and continued their hot start to the half.

Kelly and Mayfield each scored in the lane, and the baskets made them the third and fourth Ram scorers to reach double figures. Mayfield’s lay-up extended the Angelo State lead to eleven, 67-56, with 7:20 to play. 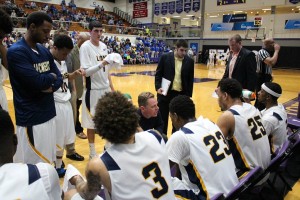 Macauley scored seven-straight points for the Lions, including going 3-3 from the charity stripe to pull them back to within eight points, 71-63. Owens hit a three to close the gap to five, but a Carnegie foul on Mayfield gave the Lions an and-one opportunity. He buried the free throw, and hit the Rams sixth three pointer of the half on their next trip down the court to regain their eleven-point lead with under two minutes to play.

Carnegie fouled out with 1:32 left in the contest and the Lions down ten. A pair of Mayfield free throws followed, and all but sealed Angelo State’s victory. 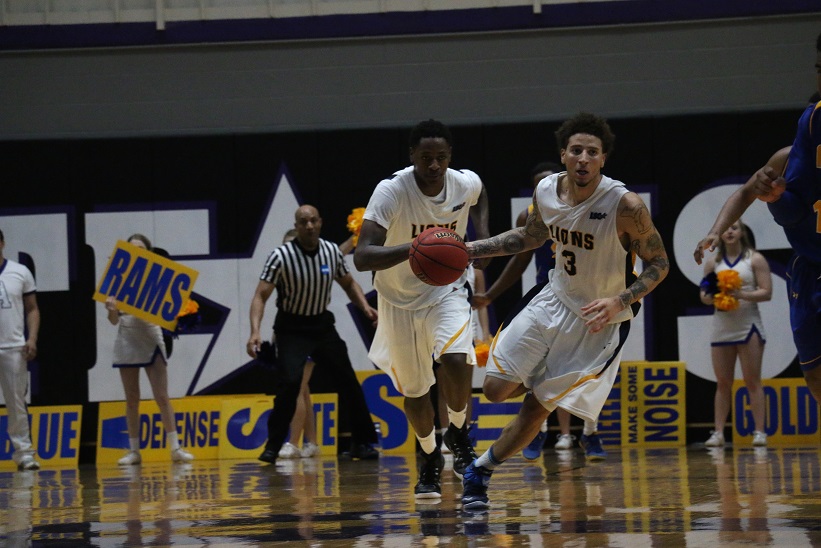 LaDon Carnegie brings the ball up the court before fouling out. Photo by Cameron Cook 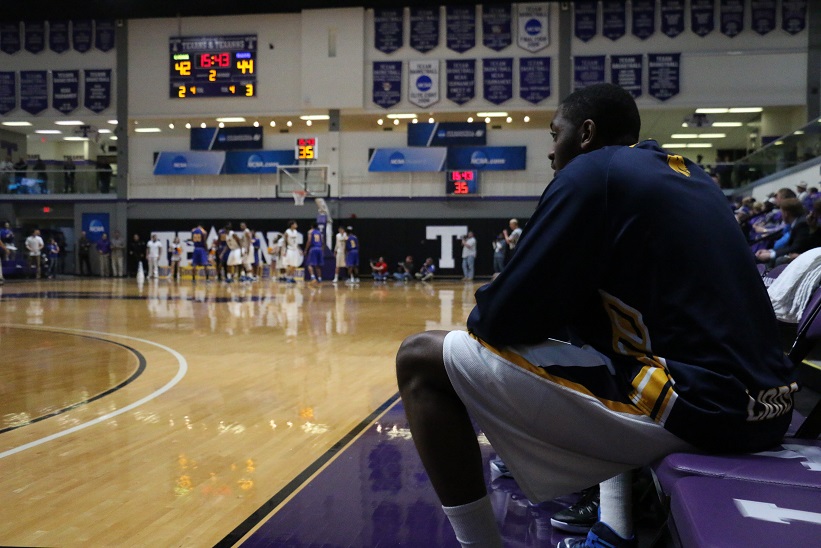 TAMUC was clinging to a one-point lead in the second half. Photo by Cameron Cook