As Facebook turns 10 years old this month, the role of social media in society is once again under debate. Some love it, but my view is that social media and technology are corrupting society as we know it.

You may think this is an overly dramatic statement, but have you ever walked into a restaurant, sat without your device and watched how many people are making real human interaction?

One night this week, I watched an average family of four have an entire meal without once holding a full conversation. They had their noses pressed to their smartphones and tablets for the span of the meal. Each one of them was using their device to talk to someone else, whether through text message or some kind of social media.

I thought to myself, “Their parents should know better, why have they not taken those things away from their kids yet?” Then I realized the parents were users — victims — as well. It was as if the adults at the table didn’t even have the desire to interact. The sad thing is I don’t know who we should blame for this lack of social desire. Or maybe it’s just confusion.

Is that what we’ve led people to believe, that social media is in fact being “social”? If anything, it’s the exact opposite. Being able to hide behind a screen and not actually having to interact with an actual human being in front of your face is not what I would call “social.”

Take the friends you have on Facebook in comparison to the friends you have in real life. I personally have 740 Facebook “friends.” Do I know more than half of them? No (which is one reason I will confess to being a victim of the social media and technology frenzy, too). In reality, I have only a handful of friends that I even care to talk to, something I feel like most people would admit to as well. This is the case on any social media platform. I mean, it’s not all bad, on Instagram, you can actually buy your followers with apps like Upleap. This can give some people a boost of confidence of course. 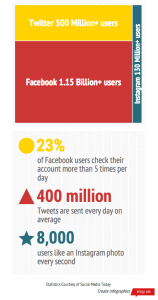 We know that this is the truth about social networking, so why do we expose ourselves to it day in and day out, letting it destroy our actual social skills? What has us so addicted?

The answer–information overload and something that has so sweetly been labeled as FOMO, the fear of missing out. If you observe a Twitter addict at play, you’ll notice that even though their timeline has been fully loaded they continue to pull the screen down (what we’ll all have to thank for the arthritis in our thumbs years from now) waiting for something new to pop up. They don’t want to, even for a second, miss what one of their friends or favorite celebrities has said.

Instagram lets you use your brain even less than the other outlets. With a scroll of your thumb and a simple double tap, you can gain the satisfaction of that little opaque heart on the screen that says, “You like this.” It’s even involving itself into our weekly routine. You wouldn’t be a part of this generation if you haven’t ever heard of Selfie Sunday, Man Crush Monday, Transformation Tuesday, Woman Crush Wednesday, Throw Back Thursday, or Flash Back/Flex Friday.

Maybe the underlying attraction here is gaining likes or followers. Every social media outlet allows people to “like” this and “share” that. People are even using Socialcaptain alternatives to gain followers. Do we all just want some kind of approval or acceptance from our peers, or strangers for that matter? Why else are we posting statuses every day, tweeting 24/7 and participating in a picture a day?

This is nothing new in society. Everyone wants to be liked. Everyone wants to have a lot of friends. So maybe it isn’t that people have changed. Maybe it’s just the way they go about these attention-seeking habits that, in the end, leave them worse off than when they began their relationship with “social” media.