Solutions for parking, other university issues discussed at general assembly

Dr. Dominic Dottavio led most of the ceremony, and guest speaker Congressman Roger Williams took the stage as well. “It’s indeed going to be a great year,” Dottavio said.

Dottavio discussed the achievements of Tarleton, including the record enrollment of nearly 12,000 students this semester and Tarleton’s nursing program being named #1 in Texas. 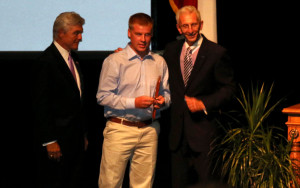 Two students in particular were recognized individually: Colton Buckley and Blake Pryor. Buckley is the first student in the history of Tarleton to serve on the Texas A&M University System Board of Regents, while Pryor received a presidential core value coin for Service and the Good Samaritan Service Award after saving a woman from taking her own life on a busy highway July 17.

Congressman Williams, who said Tarleton is one of the best schools in Texas, had the opportunity to talk to the audience about the new student acts being passed in Washington D.C., such as the Higher Education Act, the Empowering Students through Enhanced Financial Counseling Act, and the Advancing Competency-Based Education Demonstration Project Act.

Dottavio also discussed the 2020 master plan and five year campus development plan for Tarleton, which includes expanding the graduate school program and adding a college of Engineering and Health Professions.

Future renovations were also included in the development plan, such as redesigning the football stadium, updating Traditions Hall and also adding additional housing and a parking garage.

The campus development plan would also add a parking garage connected to the new student housing, which would be located on the east side of the football stadium. There would also be an additional parking garage added adjacent to the fine arts building.

There is going to be a campus forum Sept. 10 from 2-3 p.m. and a community forum that is open to the public on Sept. 15 from 5:30-6:30 p.m. in the fine arts center auditorium for those interested in learning more about the 2020 master plan and five year campus development plan.