Sloane Stables, a songwriter and senior at Tarleton State University, is the brain behind the winning Yell Contest of small and large divisions for the last two consecutive years. She wrote the Yell lyrics for both Delta Zeta and FarmHouse in 2014 and 2015. 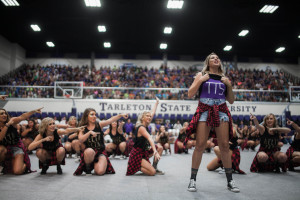 Delta Zeta won first place for the large division of Yell Contest in 2014 and 2015 with Sloane Stables’ lyrics. Stables is pictured sitting in the bottom-right corner.
(Photo by Cameron Cook)

She also said that she had the help of Emily Vanamburgh the last two years for Delta Zeta’s piece, as well as Haley Tennes and Taylor Culver. For FarmHouse, Derek Soper was in charge for the 2014 contest and Daniel Gilmore for 2015.

Yell Contest is a tradition that was added to Homecoming Week festivities by Student Government Association in the 1980s. Campus organizations put dance moves to lyrics about Tarleton traditions. The performances are judged by a panel, and the top three teams for small division and large division are chosen. After the contest, the university president begins beating the drum, followed by the Plowboys, then the winning teams.

Stables has been writing her own lyrics since she taught herself to play guitar in the seventh grade.

“I guess you could say that’s why I had such a draw to this and why it comes pretty naturally to me,” she said.

Yell Contest also happens to be Stables’ favorite tradition of Homecoming Week, and she said that is another reason why she works her fingers to the bone.

“After going through the disappointment of being disqualified for a hand going out-of-bounds my freshman year, I knew that we could come back and get credit for what we worked so hard for, and I wanted to make that happen,” said Stables.

After her sophomore year, Stables was nominated in Delta Zeta to be in charge of Yell Contest 2014 and came up with the USA theme. This year, she was chosen to help Emily Vanamburgh and Taylor Culver with Yell.

Stables said that a few members of FarmHouse asked her to write their Yell Contest lyrics last year. She was not going to at first, because she did not think she would be able to juggle two Yell Contests and her nursing classes. Despite her disbelief, she juggled her classes and 8 hours a week of Yell practice and helped Delta Zeta and FarmHouse win two years in a row.

Because of the 2014 Yell Contest success, FarmHouse asked Stables to write their lyrics this year and help with a theme, and she thinks she will be helping them again next year.

“Honestly, we couldn’t have gotten where we are without Sloane. She is a lyrical genius,” said Gilmore, a sophomore student and the song leader for FarmHouse.

“The guys were all so great and respectful,” Stables said. “I really enjoyed teaching them. Delta Zeta was fun too, but so much more challenging with 90 or more girls. The moment they announced the winners, the long, late hours (were) so worth that feeling. It’s so rewarding to be recognized for hard work.”