DALLAS (AP) — A crime-watch volunteer facing four rape charges in his south Dallas neighborhood was back in Texas on Friday more than a week after being captured in Louisiana.

Van Dixson was held on four counts of aggravated sexual assault with bond set at $4 million, Dallas County jail records show. No attorney was listed for Dixson, 38, who was returned to Texas on Thursday. 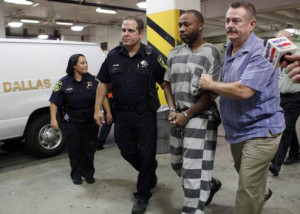 Investigators say DNA evidence links Dixson to at least four sexual assaults in the Fair Park area. Nine sexual assaults have been reported in the area since June 22, according to police Chief David Brown.

A tip led police to interview Dixson on Sept. 4 and he provided a DNA sample. Dixson was released without being charged. When test results linked Dixson to attacks several days later, authorities began searching for him, eventually arresting him Sept. 10 at a motel in Baton Rouge, La.

The Mill City Community Association, which is a neighborhood crime watch group, said Dixson had been a member since January. Some residents said Dixson could often be seen walking the streets at night, purportedly on the lookout for criminals.

Dixson was convicted of aggravated robbery in 1993 and served more than 10 years in prison, criminal records show.