ANAHEIM, Calif. (AP) – Three rides at Disneyland, including the famous Space Mountain roller coaster, were temporarily closed over the weekend as the company reviewed its employee safety protocols after citations from state regulators.

The citations were received Friday from the California Division of Occupational Safety and Health, according to Disneyland Resorts spokeswoman Suzi Brown.

The closures Saturday of Space Mountain, the Matterhorn Bobsleds and Soarin’ Over California were voluntary and were made out of an abundance of caution, Brown said Sunday. 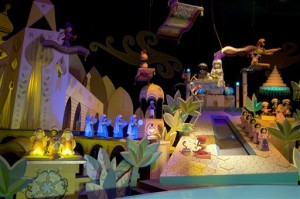 This Jan. 23, 2009 file photo shows the characters Aladdin, Jasmine and Abu from the film, “Aladdin,” on the “It’s A Small World” ride, at Disneyland in Anaheim, Calif. An attorney says a disabled man, Jose Martinez, was awarded $8,000 by Disneyland after the ?It’s A Small World? ride broke in 2009, stranding him for half an hour while the theme song played continuously.
(AP Photo/Damian Dovarganes, File)

“We constantly strive to maintain a safe work environment for our visitors, cast members, and contractors – and we are reviewing certain protocols,” she said.

The citations were related to an incident in November when a contracted worker was injured while performing maintenance on the exterior of the Space Mountain attraction. The nature of the accident is currently unclear and it is unknown if the injured worker will need an attorney or if they will press charges against Disneyland.

Disneyland failed to adequately correct “known fall hazards” that existed on the exterior of Space Mountain, according to a description of the citation on the Cal/OSHA website.

“Furthermore, Disneyland Resort failed to have approved anchorages or approved tie-backs for contract employees to attach to when performing scheduled exterior building maintenance,” the description reads.

The Matterhorn reopened Sunday. Brown said Sunday it is unclear how long the other two rides will remain closed.

Space Mountain and the Matterhorn Bobsleds are at Disneyland. Soarin’ Over California, a simulated hang-glider flight, is at Disney California Adventure.

Officials with Cal/OSHA did not immediately reply Sunday to a request for comment.