The Obama administration has had to revise and refine some initial enrollment numbers for health insurance sign-ups after they turned out to be too optimistic. At other times, metrics less favorable to the president’s overhaul leaked out after officials claimed not to have such data.

Parsing the numbers is a new pursuit for administration officials from President Barack Obama on down, to lawmakers of both parties and a gaggle of outside analysts.

The latest data tweak — an administration announcement that 7.3 million paying customers signed up for subsidized private insurance as of mid-August — set off more speculation. Some said it may prove overly rosy.

“They have been playing fast and loose with these numbers,” said insurance industry consultant Robert Laszewski, a critic of Obama’s law who has also skewered proposals from the president’s Republican foes. “Until we get an outside audit we are not going to know what the heck is going on.”

Others say an administration trying to get a complex program running smoothly deserves the benefit of the doubt. 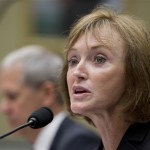 FILE – In this Sept. 18, 2014 file photo, Medicaid Administrator Marilyn Tavenner testifies on Capitol Hill in Washington. Scrambled statistics are becoming part of the growing pains for President Barack Obama’s health care law. The administration has had to revise and refine some initial enrollment numbers after they turned out to be too optimistic. At other times, less-favorable metrics leaked out after officials claimed not to have such data. (AP Photo/Manuel Balce Ceneta, File)

“They have two challenges,” said Dan Mendelson, CEO of the market analysis firm Avalere Health. “One is technical implementation, and the second one is the political environment. Being fully open on the implementation side is impossible in the context of a hostile political environment.” Earlier this year, Avalere showed that the administration’s initial numbers significantly overstated Medicaid enrollment under the law.

Candidates for Congress are noisily debating another set of numbers. They have to do with costs, an even murkier element. Republicans claim the law has saddled taxpayers and privately insured people with huge cost increases, while Democrats say it has helped to rein medical inflation, saving hundreds of billions of dollars. Economists shrug off such claims, saying the impacts have generally been modest — and mixed.

The Affordable Care Act created new insurance markets — or exchanges— where middle-class people who don’t have health coverage on the job can buy a subsidized private plan. It also expanded Medicaid to serve more low-income adults.

After Medicare Administrator Marilyn Tavenner announced the updated 7.3 million private sign-ups at a congressional hearing last week, other administration officials fanned out to insist that reporters must not compare those numbers to the more than 8 million enrollments trumpeted in May.

At the hearing, Tavenner seemed to have no such qualms. She explained to Oversight Committee Chairman Darrell Issa, R-Calif., how to make such a comparison.

The 8-million figure, she said, probably included some people who may since have found another kind of health insurance, either through a job that includes coverage or by qualifying for Medicaid. Others likely did not finalize their enrollment by paying their first month’s premium

Laszewski said even Tavenner’s new, lower number could be high. He’s skeptical because the administration hasn’t shown how it’s doing the math.

And there are other variables. Enrollment could decline later in the year because about 115,000 people who couldn’t prove they were citizens or legal residents will lose coverage at the end of this month.

Another winnowing seems likely after Nov. 1, when people whose incomes differ with what the government has on file will see their premiums change. Some may drop out if their subsidies are slashed.

Here are more illustrations from the health law numbers game:

—Medicaid Muddle. Under the law, states can expand Medicaid to cover more low-income uninsured people. Earlier in the year, administration reports on the Medicaid expansion included many people who were renewing their existing coverage under the program — not joining anew because of the expansion. Officials say they are now providing a more accurate count.

—Targets? What targets? Even before last fall’s chaotic debut of HealthCare.gov, administration officials steadfastly insisted they had no enrollment targets for the exchanges. But The Associated Press obtained an internal memo to former Health and Human Services Secretary Kathleen Sebelius that listed monthly numerical targets for each state. Even so, some officials insisted those were not targets. The memo said “Enrollment Targets” in the subject line and repeated the word a dozen times in the text.

—Disclosing Discrepancies. Around the middle of May, administration officials maintained that they could not confirm or provide any estimates about the number of people with citizenship, immigration or income discrepancies that could affect their new coverage. However, an internal slide presentation dated May 8 indicated 2.1 million enrollees had such data discrepancies as of the end of April. The slides were provided to AP.