With the school year starting and freshman getting settled into their dorms, the question of “why do I have to live on campus?” comes up once more.

Every Tarleton State University student has had to deal with it––the two-year requirement placed on freshmen, which dictates where they can and cannot live. Tarleton claims it is in the student’s best interest; that they are more likely to stay in college, they will have more fun living with other students and attending campus events and they will be safer. 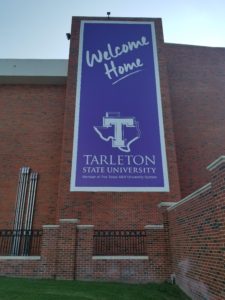 Each fall, Tarleton welcomes the freshman class, which grows in numbers every year.
Photo by Shelby Clayton.

These only apply in a perfect scenario, one where the student becomes best friends with their roommate, and is a school-spirited extrovert who wants to attend all the events Tarleton holds. The university isn’t thinking about the student who doesn’t get along with their roommate and would rather be studying or watching TV in their free time or isn’t that interested in sports or school traditions –– these types of college students exist, even if they are rare.

Another concern Tarleton students may have when they are required to live on campus is the cost. Does Tarleton actually care about the betterment of the student experience or do they just want a guaranteed check for the thousands of dollars they get for housing one student? For students who already struggle to pay for their education and have to do so out of pocket because they make “too much” to be eligible for FAFSA grants, living in an off-campus apartment might actually be more affordable.

Of course, there is the argument that proximity to campus can impact a student’s performance and that argument is valid considering students living on campus will be more likely to attend classes. For example, Bosque Crossing Apartments may be an excellent choice for first and second-year students who prefer not to pay the high cost of a dorm and wish to be close to campus without the price attached. Bosque is practically on the Tarleton campus and it would also be cheaper than paying to live in a residential hall.

In addition to students waiting to get housing, some students are having to room with a third person. The dorm rooms are barely big enough for two people; much less three. If students are having to wait for months to obtain a dorm room because there isn’t enough availability, then why keep the requirement for students to live on campus for their first two years?

Requiring underclassmen to live on campus also affects parking. The residential parking spots outnumber commuter spots by 13 lots. By requiring students to live on campus the first two years, the students bring their cars and just let them sit in a lot everyday for most of the week. This causes commuter students to struggle everyday trying to find a parking spot after driving all the way to campus, sometimes from multiple towns away.

The inconveniences outweigh the benefits. Tarleton should not decide where a person should live, they should just provide them with the best college experience––the freedom to choose who you want to be and where you want to live.

This opinion was written by the Texan News staff. The views expressed by the Editorial Staff do not necessarily reflect those of Texan News Service as a whole.