Recent allegations of attempted sexual assault against Supreme Court Justice Brett Kavanaugh added to a society-wide conversation about the issue of sexual misconduct and why some victims wait so long to come forward about their experiences.

During the last week of September, while Kavanaugh was awaiting confirmation of his nomination, he and Dr. Christine Blasey Ford separately testified in front of the Senate Committee on the Judiciary after Ford accused Kavanaugh of trying to rape her at a party in the 1980s. 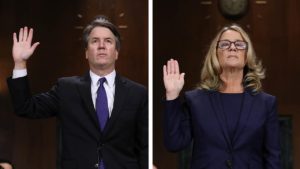 During the last week of September, while Kavanaugh was awaiting confirmation of his nomination, he and Dr. Christine Blasey Ford separately testified in front of the Senate Committee on the Judiciary after Ford accused Kavanaugh of trying to rape her at a party in the 1980s.
Photo courtesy of wsj.com.

Ford’s allegation against Kavanaugh became a polarized issue, with some Americans believing Ford and arguing that Kavanaugh should not serve on the Supreme Court. Others argued that because Ford waited so long to speak up about the alleged experience, her accusation may be false. This eventually led to the Twitter hashtag, #WhyIDidntReport.

Victims of sexual assault are often met with accusations of lying and with questions about what they were wearing, if they were drinking, and if they were flirting with the assailant––as if to blame the victim for what happened to them.

If the assailant is a person of authority, the fear of no one believing they would do such a thing or that people might think the victim is making the assault up just to break down that person’s power, is another reason why sexual assault victims stay silent about what happened to them.

Victims may feel ashamed that they have been assaulted and it may make them feel it is their fault they were abused. They start to blame themselves, and therefore they don’t want to share with anyone because they believe it makes them look weak.

Some victims of sexual assault do not remember exact details, because the human mind is engineered to forget traumatic experiences the best it can. Because the victims cannot always piece together every moment of the assault, they may start to question what actually happened to them, and so they don’t come forward out of fear of being ridiculed for not remembering. Victims may not go forward to report the crime because such things are already so painful to think about, that it is easier for them to move on by just “getting over it”. It’s a healing mechanism for the victims to block out such events in order to heal.

Regardless of your political beliefs, one thing everyone can agree on is that sexual assault is wrong and victims of sexual assault deserve to be heard.

So, what can be done to help victims feel comfortable with sharing what happened to them?

For starters, while it is important to allow the accused to defend themselves against what could be a false accusation, we need to stop shaming those that come forward about their alleged experiences.

We must really stop asking victims of sexual assaults such question as, “Well, what were you wearing?” as if revealing clothing gives a rapist permission to commit such an offense. As a society, we tend to focus on the sexual nature of sexual assaults. But the article “Sexual Assault is About Power” by Psychology Today, explains that rape is motivated by much more than just a desire to have sex with someone. Power—whether it be the power through authority or the desire to have power over someone else who may be vulnerable—plays a major role when it comes to the issue of sexual assault.

Power is also the reason that many sexual assault victims don’t speak up. They don’t feel empowered to talk about their experiences for fear of being chastised for what they were wearing or the decisions they made during the time of their alleged assault. Many also assume victims are lying or trying to get revenge on their assailant.

We must put an end to this. We must do what we can at all levels—from being supportive to our friends who tell us about their sexual assaults to ensuring that those who commit sexual assaults are not being let off because of a position they may have in society. We also need to stop assuming that the accused is lying when there is no evidence that supports that claim.

As time progresses, we as a society must progress too. It’s high time that we stop making victims of horrific acts like rape afraid of speaking up and getting the justice they truly deserve.

The views expressed by the Editorial Staff do not necessarily reflect those of Texan News Service as a whole.