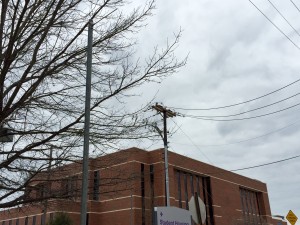 The site where the Tarleton flag was taken from.
(Photo by Jack Cochran)

Tarleton State University has taken action after the theft of the Tarleton flag on Jones Street Thursday night. This theft represents more than a missing piece of fabric, however.

Executive Director of Student Engagement Darrell Brown sent an email to all Tarleton students and some staff on Friday, Feb. 13, at 9:02 a.m. In his email, Brown wrote “The flags are placed around the Thompson Student Center to display our pride, spirit, and support of Tarleton’s Core Values.”

Tarleton, long being known for its traditions, holds “Purple Thursday” each week, where Tarleton students and staff wear purple shirts to celebrate Tarleton and its colors. Now, because of the stolen flag, “Purple Thursdays” are going to be impacted, Brown says.

“We have decided not to fly the Tarleton flags on Purple Thursdays until it has been returned.”

The email was ended with the Tarleton Color Song, which includes the line, “Oh, our hearts with joy are thrilling, when the Tarleton colors wave.”