Stephenville community conquers cancer one step at a time

In a town where southern hospitality never runs in short supply, Stephenville community members are banding together to raise money for Stephenville residents, Shari Farrow and Riley Esquivel, who were diagnosed with different forms of cancer last year.

Located at Stephenville City Park on Saturday, a “Conquering Cancer” benefit 5K and one-mile fun was held to raise money for the Farrow and Esquivel families. Race director Krissy Byrd hopes this event will help with the expenses while Farrow and Esquivel travel down this road with cancer. 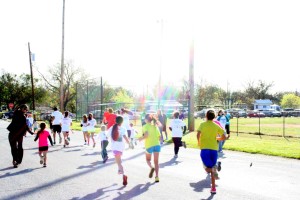 “We want to show both Shari and Riley that we support them, financially, emotionally and in other ways. By many people coming out to this event, it shows support to those two, and that the community really cares for and loves both,” Byrd said.

Farrow, a kindergarten teacher at Central Elementary, was diagnosed with breast cancer in 2012. A part of the Stephenville ISD school system, she is also married to Henderson Junior High ISS teacher, Ron Farrow. During her battle with cancer, students and faculty have helped raise money for the Farrow family in various ways.

This past October, during Breast Cancer Awareness month, the Henderson Junior High cheerleaders hosted a “Pink Out” week and dedicated it to Farrow. They sold T-shirts, head bands and even received donations during a “pink out” football game. During the “Pink Out” week they were able to raise over $1,200 for the Farrow family.

Esquivel is the baby son of Jerry and Rachel Esquivel, both teachers in the Stephenville school system. At only seven weeks old he was diagnosed with Neuroblastoma, a cancer that forms in immature nerve cells and affects mostly infants and children, along with a tumor that was pressing against his spine.

The Esquivel family spent two months in the Cooks Children Hospital in Fort Worth, Texas, while their son was undergoing treatment. Now seven months old, Esquivel has gone through four rounds of chemotherapy and his last scan had shown no signs of Neuroblastoma, and his tumor had shrunk down as well.

Fundraisers have also been held for the Esquivel family by those in the community and SISD faculty. Late last year after Esquivel received his diagnosis, a fundraiser called “Team Riley” raised money for the family by selling T-shirts, bracelets and Neuroblastoma buttons at basketball games.

While the family was in the hospital for two months, a bank account was also set up for the Esquivel family that people could donate to while helping with their expenses while in Fort Worth.

“We feel so blessed to live in this community,” Rachel Esquivel, the mother of Riley, said. “Thank you for the continued prayers. We have met so many people in our community who have supported our family even if we didn’t know who they were.”

After brainstorming a few ideas about some more fundraisers, SISD faculty members Sharon Hatler, Krissey Byrd, Joyce Roulston, Kelli McKinzie and Holly Hubbard came up with the idea to do a benefit 5K and fun run along with a silent auction.

“We figured their hospital bill was going to be expensive, and that Shari was, and still is, receiving treatments. Since Shari and Riley will continue to receive treatments or have tests run, we figured they will keep getting bills from the doctors and hospitals,” Byrd said. “We know how great of a community Stephenville is, so we knew that people would come together to make this successful.”

Over 150 people registered for the event to show their support for the Farrow and Esquivel families.

“We hope to raise the much needed funds for the families, while teaching our students that it is better to give than to receive,” said SISD faculty member Joyce Roulston. “Our Henderson Junior High students have learned so much about giving this year and have not hesitated a minute when asked to do so.”

One hundred percent of the money raised from the “Conquering Cancer” 5K benefit is going to the Farrow and Esquivel families to help with their medical expenses while undergoing treatments and checkups.