Stephenville native Sid Miller is being considered for Trump’s cabinet

One of those being considered for President-elect Donald J. Trump’s cabinet is Stephenville’s own Sid Miller. Miller is currently the 12th Agriculture Commissioner for the State of Texas and is one of the Texas natives who are being mentioned as potential members for Trump’s cabinet.

Miller said he found out that he was being considered for Trump’s cabinet about three weeks before the election when he was interviewed about the nomination by reporters from Politico, The New York Times, ABC and other credible news organizations.

“Of course, I asked them who the source was and they wouldn’t tell me,” Miller said Sunday night in a telephone interview with Texan News. “The New York Times has me on a short list and ABC has me as the lone finalist, so we’ll see. I don’t expect to actually be approached or even possibly if I get an interview, it’ll be probably maybe separate. That was indicated with me by the transition team.”

Miller said he spoke to Trump’s transition team three days ago on a conference call, but the call was not related to his possible involvement in the Trump presidency as the Secretary of Agriculture. 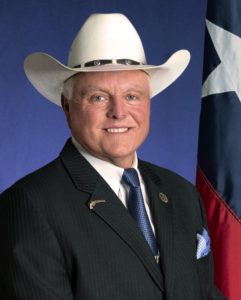 Miller grew up in Comanche County and graduated from De Leon High School.

“We had a ranch in Brown County where we ran cattle, sheep and goats. We also had hogs growing up,” he said, adding that his family farmed peanuts, pecans, watermelons and cantaloupes.

He attended Cisco Junior College on a scholarship, where he was a member of the rodeo team and student body president. He transferred to Tarleton State University and graduated with a Bachelor of Science degree in vocational agriculture.

“I was an ag teacher for five years in Gustine, Texas. I started my own business, running a cattle and horse operation and farming peanuts,” he said. He bought a nursery in Stephenville in 1985 and also moved his family to Stephenville. “We’ve been here ever since,” he said.

Miller explained that his career in politics began in 2000 when he was serving on the Stephenville Independent School District board and was recruited to run as a Republican for state representative against an incumbent Democrat.

“The Republicans hadn’t had a seat since Reconstruction after the Civil War” said Miller.

“This is in the year 2000. So, I actually defeated the Democrat. It was the only win that the Republicans picked up that year, the same year George Bush (George W. Bush) was elected president.”

He was a member of the Texas House for 12 years, and served as chairman of Agriculture and Livestock Committee and Chairman for Homeland Security and Public Safety.

After he was defeated in 2012 by J.D Sheffield, he returned to Stephenville to continue running his business. After settling in Stephenville for a while, he was recruited to run for Agriculture Commissioner. He ran against a field of five during the Republican Primary and a field of three during the general election: a Democrat, a Libertarian and a Green party candidate. Miller won and was elected as Texas’s 12th Commissioner of Agriculture in 2014.

As Texas Agriculture Commissioner, Miller said that he is suing the Environmental Protection Agency due to a proposed federal water law that would hurt agribusiness.

“It’s really burdensome on agribusinesses, energy companies and everything else,” he said. “If that would’ve actually become law, it would probably put a lot of people out of business.”

Trade issues will also be considered a top priority. “I think my role as the secretary of the U.S Department of Agriculture would be heavily invested in trade issues as far as renegotiating NAFTA (North American Free Trade Agreement) or TPP (Trans-Pacific Partnership) or trade with China or any other global initiative.”

Miller said that the U.S Department of Agriculture will also face the task of having to write a new farm bill within the first two years of Trump’s presidency.

Miller is known for being one of Trump’s most loyal supporter from the start of the president-elect’s campaign.

“I was out front when most other statewide elected officials and candidates were treating Donald Trump like he was radioactive or Kryptonite,” he said.

Miller described Trump as a winner who wants to make major changes in the government.

“Rural America is actually the ones that put Trump in office. Rural America turned out higher than any other subgroup. Over 60 percent voted… for Trump and rural America is where you find our family values, our traditional American heritage, the values that are solidly Christian Evangelical, kind of backbone of America, very patriotic, God-fearing [people who] love the Constitution.”

Miller said that if the Supreme Court is not conservative, rural America suffers when it comes to issues such as property rights, eminent domain and the Second Amendment.

Miller continued, saying he believes that conservatism, as well as a willingness to work is much needed for Trump’s cabinet. “You know, he said ‘if you come to work for me, if your one of my appointees or higher, you’re going sign an agreement that you’re not going to lobby for five years’… I think that’s a step in the right direction. I think he’s absolutely right. People go up there and work for 18 months, resign and go to lobby and they’re going up there for the wrong reasons. You need to go up there and serve in the Trump administration because you love America and want to make America great again.”

Regardless of whether he lands a job in the new administration, Miller said he looks forward to Trump’s presidency.