Located across the Stephenville City Park on Graham Street, the Bosque River Trail is a 1.5 mile walk, hike and bike pathway. It takes visitors past by lush, green woods and vast, rolling fields.

The trail is a convenient escape from life in Stephenville. But it’s close enough visitors can get back quickly is something interrupts their stroll.

Greta and Richard Goins of Stephenville use the trail on a daily basis. They like it’s accessibility.

Stephenville’s Mayor Kenny Weldon says the trail’s proximity to downtown “is a huge asset for us.”

“The downtown area will benefit tremendously from the trail being there because it will become a destination point,” he explained.

Expansion plans include adding on to what can be found near Tarleton Street for a total of 8.2 miles. The extra trail is expected to end at the Stephenville Optimist/Jaycee Park.

After the completion of the master plan, Collier says they plan to have a community gathering next year where everyone can see what the expansion will look like for the Bosque River Trail.

In addition to receiving support from its community, leaders from Keep Stephenville Beautiful are also getting help from Tarleton State University.

“It’s an effort of the entire community and Tarleton, and I think everyone wants to see this happen, and it will happen,” said Collier.

Officials hope the Bosque River Trail will serve as an example to other cities with similar resources to Stephenville’s. 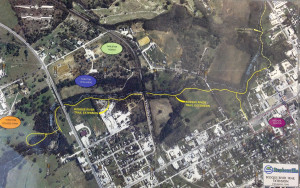 “A lot of peoples’ immediate reaction will be that the trail is just a place to go walk and jog,” says Weldon. Yet, the mayor says, the comprehensive concept of the Bosque River Trail is “preservation of the existing natural resources, recreation which is healthy lifestyles, and education which is using the river and its components to help teach.”

Currently the trail measures an approximate 1.5 miles, going from the turnoff at Crow Street to where it winds up at Tarleton Street, behind the Stephenville Post Office. However, there are different access points in-between these two entry locations.

Also included within the expansion are facilities such as bathrooms, water fountains, more trash receptacles, rest stops, a paddle trail and even the possibility of an equestrian trail.

Officials do not know when the completed trail will be open to the public.

Yaritza Corrales is a sophomore Communications/PREM student from Dublin, Texas. She is currently serving as the Web Manager for Texan News Service and Cross Timbers Trails Magazine.