Adam Smith, a senior at Tarleton State University, along with Tarleton’s kinesiology department and athletic trainers hosted a teddy bear drive for Cook Children’s Hospital in Fort Worth from March 8 to March 31.

According to Tarleton’s website, new toy teddy bears of all shapes, sizes and colors are blessed during worship services, and then delivered to medical center chaplains. These bears are given to patients who need encouragement or support after a painful procedure, during a lengthy hospital stay or during difficult times.

Chaplains give them to children on difficult days so they will know that people they have never even met before, care about them and are praying for them. The PrayerBears often mean so much to children and their families that some families return to the medical center and donate bears right back to the program. 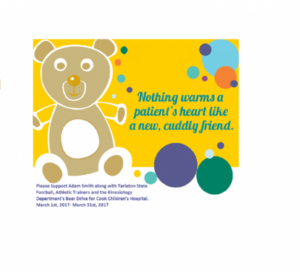 Smith, unofficial coordinator for the teddy bear drive, says that he was looking for a way to donate to the hospital and thought about the PrayerBears.

“The bears go to Cook Children’s hospital in Fort Worth and that’s where I was when I had an injury so I know how much they mean to the kids. I’ve seen it happen too so I just feel like this is one of the best ways I can give back to the place that helped me,” Smith said.

Prayer Bears are actually quite popular at the Cook Children’s hospital.

“They make it a big deal down there. They’re called PrayerBears and they have their own special room and everything. [My mom and I] just figured that was where we can do the most good,” Smith said.

The teddy bear drive has collected between 110-120 bears this year. Smith said that he was both surprised and pleased about the outcome.

“I’m glad that so many people put in time and money to go find bears and donate them. I know it’s especially hard in college. I know people don’t want to just put money in random places that they don’t understand or know where it’s going, but I’m glad there was such a reaction to the bears,” said Smith.

According to the bear drive flyer, bears are so meaningful to families that they are tucked in next to little ones being whisked off to surgery, held next to the hearts of anxious mothers who are waiting for news, kissed by injured children waiting for their families to arrive at the hospital, and loved by siblings who are feeling a little left out of the action.

“My favorite part [about the teddy bear drive] is just knowing how they make kids feel because I’ve been there and I understand what it means to those kids and it just makes me really happy knowing that I’m doing something good,” Smith said.