According to interviews and research, athletes receive from the university more than twice the amount of scholarship money that other students receive, based on the most recent completed records of 2012-2013.

The Texan Fact Book reports  about 10,000 students attended Tarleton during the 2012-2013 academic year. Out of that number of students, about 2,388, or just under 24 percent, of these students received scholarship money from university accounts, said Shawndi Wilson, director of the scholarships office. This does not include private scholarships from outside donors or scholarships funded by grants. 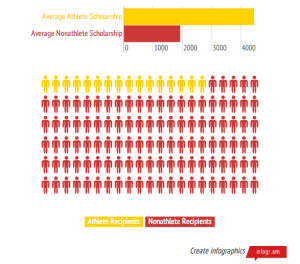 The remaining two account divisions—scholarships gifted from the university and the TSU Foundation—are combined, then given to students based on academics, performance and financial need, Wilson explained. Together, these two divisions contained $4,014,571.53 for the 2012-2013 award year. Even though this number is larger than athletic awards, this money was distributed to about 2,081 students, according to institutional research. That works out to $1,929.15 per student—or less than half the average award to an athlete.

Tarleton students are divided on whether athletes should receive more scholarship money than non-athletes.

“I believe academically honored students and athletes both should receive the scholarships that they deserve,” said Dalton Billings, a 19-year-old sophomore from Ennis. “So maybe athletes received more money as a whole because they were more recognized individuals.”

“I believe athletes work just as hard as academically honored students to become the athlete that they are,” Spencer said. “Therefore, I believe that students are given scholarships that they deserve regardless of what they do.”

Hannah Harrison, a 20-year-old junior from Katy, said her classmates in high school who were not athletes had to compete harder for scarce scholarship money than the athletes did.

“I don’t think this is fair because all students should receive the same amount of scholarship money,” she said.

Scholarships funded by grants are another type of financial assistance available to Tarleton students. This money generally comes from the government instead of the college or other private donors. More than $228,488 was given to Tarleton students through 208 grants in 2012-2013, Wilson said.