The exhibition ran from March 26 to April 10. Over 20 artists submitted into the gallery this year. The gallery showcased multiple different forms of media including photography, sculptures, painting and animation.

This year’s juror was Kalee Appleton, a photography-based artist and president of 500X Gallery in Dallas. 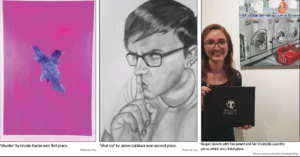 Ruelas, who is going for her post-baccalaureate in studio art, won the top award with her Painting “Murder,” a bright pink painting on canvas with three crows in the middle. She received a $500 scholarship, as well as her art being displayed on the label of a wine bottle.

“This piece came about after I forgot my paint pad for class and improvised by painting the assigned monochrome on neon green masking tape,” Ruelas explained. “So, of course, I had to start with a murder of crows.”

Second place went to Calaluca, a junior going for his Bachelor of Studio Arts degree with a teaching certification. He received a $300 scholarship for his piece “Shut Up.”

He continued about how “that half (the realistic one) is shushing the other half, a more masculine-looking version of me who was screaming. It was a (deliberately) heavy-handed portrayal of struggling with being trans (transgender).”

Swaim, a junior going for her degree in art education, won third place with “Riverwalk Laundry.”

“’Riverwalk Laundry’ has always been one of the pieces that I was fond of,” Swaim explained.” It was my very first painting that had gotten me interested in the ordinary. This painting fluctuated over my course of working on it and it turned out better than I could have planned. I am so glad I got to share it with so many people and gifted artists.”

Every year, students from all across campus can submit their artwork into the juried exhibition in the spring. The event continues to grow each year as more students spread the word about the show.