A 49-year-old registered sex offender says he withdrew from Tarleton State University after being accused of touching a female student’s thigh in the Dick Smith Library.

In the narrative from the Tarleton police report, Officer Douglas Johnson said he spoke to the victim (whose name was redacted) at the police department. The victim stated that McMurray inappropriately touched her at the library on the 28th (of November).

McMurray, who goes by the name “Bubba,” said in an interview that he did not touch the woman’s thigh. But he also said he has “brain damage and my short term memory is shot.”

McMurray was arrested for indecency with a child by sexual contact in the year 2000. The victim was a 7-year-old female. He was sentenced to seven years of probation with community service. According to the Texas Department of Public Safety, McMurray has a “moderate” risk level. He lives in Meridian, but was a Tarleton commuter student up until late January, when he withdrew from the university.

A female sophomore, who asked to remain anonymous, says that McMurray encountered her and some friends last November at the Tarleton library. The student says she was sitting at a table with her sorority sister and her sorority sister’s boyfriend.

“And then, [at] the other table there was a lot more sisters there. And so, I was on the phone and I was doing homework and I look over and this guy had walked up to the table with them and he started talking to them for a while,” she recalled in an interview.

The student said that McMurray eventually walked over to the table she was sitting at. She said she stayed on the phone, hoping he would not talk to her. However, as soon as she ended the phone call, she says McMurray noticed and immediately started a conversation. He began by asking her questions such as “What’s your major?” and “How old are you?”

It wasn’t long before McMurray tried to get more personal with the female student.

The student said that McMurray kept saying he was about to leave the library, but continued to speak to her and her friend. She said that at one point, he even told them that he loved them and wouldn’t want anything to happen to them.

McMurray brought up the topic of Thanksgiving and told the student he needed to find a wife who can cook for him.

The sophomore student mentioned that McMurray also gave her friend his business card. Her friend had seen the Tarleton sex offender list before, and instantly recognized McMurray’s name. When McMurray left the library, she went back to the sex offender list for confirmation. It was then that she was able to confirm that the man who approached them was the same man listed on Tarleton’s police page as a registered sex offender on campus.

“She’s (The victim’s friend) a criminal justice major and so she said that in one of her classes, they told her about how you can go to the Tarleton police website and you can find out if there’s any registered sex offenders who go to school here,” the student explained.

The female student said that both her and her friend filed police reports against McMurray.

Texan News interviewed by McMurry by phone on, Jan. 27. 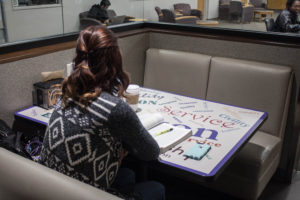 The anonymous Tarleton student said the incident happened in the library, and returned there for this photo. Photo by Justin Pack

“I didn’t do anything to be accused of what I did, of what I supposedly did, nor would I do it to anyone else. Especially the kids (that go to Tarleton),” he added. “I think they’re a bunch of girls trying to get attention.”

McMurray also said that he is not a sexual predator and was framed for the crime in 2000 by the step-mother of a former wife.

McMurray said he left Tarleton because he did not want to deal with any more accusations.

“I could’ve stayed in Stephenville, at Tarleton, but I chose myself to drop out because I didn’t want to be accused any more of doing stuff I did not do or I can’t remember I did,” he said.

Texan News contacted McMurray’s mother and father by telephone. They declined to comment.