Student was misinformed about police escorts

Andrea Bird, a social work senior, spent most of the afternoon and evening Monday night studying in the Dick Smith Library. By the time she was ready to call it quits, it was 1 a.m. and pouring down rain. Her car was several blocks away on the other side of Washington Street and she wanted a police escort.

After dialing the Tarleton State University Police Department phone number on the back of her Texan Card, she was forwarded to the Control Center where she says a woman working told her police couldn’t take her because they don’t leave campus.

Even though Bird was forwarded to the Control Center, she said she was still hoping they would be able to put her in contact with Tarleton police since they offer escorts at all hours.

Bird said she was also told to try the shuttle service, even though Bird’s destination was out of the shuttle’s route.

Bird said she asked, “So, what do I do?” and the person in the Control Center’s response was, “Do you have an umbrella?” 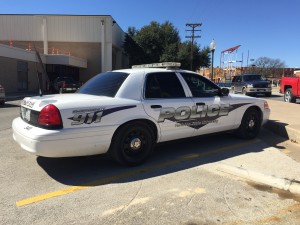 One of the many services Tarleton State University police offers are escorts.
Photo by Cody Johnson, Texan News

“Both offices were very nice when I contacted them and assured me it will be addressed. I am very pleased that they are looking into it, because I do not want anyone else to have this happen to them,” said Bird.

After Leese listened to the play-back of the phone call between Bird and the Control Center, he said he “did not find the operator to be impolite, but she was incorrect in telling Andrea that escorts were not provided on the other side of Washington. The Control Center should have forwarded the call to university police, and Andrea should have received the requested escort.”

In an email from Leese, Mark Garner, manager of utilities and energy services said the woman working at the Control Center “could have handled it better.”

Bird said she assumed after she called the police’s number on the back of her Texan Card that she was talking to a dispatcher from the Tarleton Police Department.

“I thought since it was raining and late at night, it wouldn’t be an issue for me to just be taken to my car. So, in the TSU police officer’s defense, they were never notified I needed an escort. It never left the Control Center,” said Bird.

In an email to Leese, Tarleton Police Chief Matt Welch said, “We do escorts on campus 24/7, and that includes any portion of our campus to include the farm or leased property (The Grove). As long as we know about it, we will respond. We also do vehicle jump-starts and unlocks with the same boundaries. Officers have at times gone slightly beyond our boundaries for these service-type events just to go the extra mile for our students.”

After Bird got off the phone with the Control Center, Bird said she was too frustrated. Bird knew a woman working in the library at this time who insisted on taking Bird to her car, which she did.

After Allcon spoke with Garner about the phone call, Allcon emailed Leese saying, “Reportedly, she did not tell Andrea that we would not provide an escort but that we did not go across Washington. I have not heard the recording yet, but Mark is going to send them to me. Additionally, Mark stated she did call Andrea back and told her she had located her an escort to which Andrea replied she had it taken care of or something of that nature.”

However, Bird claimed she never received a follow up call about the potential escort.

“She called me back, but I don’t remember her saying she found me an escort. And Alvin never asked me about it. And yes, the only call I listened to (with Alvin) was the one (when) she told me they couldn’t leave campus and I asked what to do and she said I don’t know do you have an umbrella,” said Bird.

Garner was contacted today for more information about the telephone operator but had no comment.

Bird claims she is independent and wouldn’t have requested an escort if it hadn’t been raining and been so late.

“I just don’t want anyone else to be in my situation and not have someone there to help,” said Bird.