Laura Thomas, a social work major at Tarleton State University, has founded a new organization to shed light on addictions after her struggle with an eating disorder.

A 22-year-old junior, Thomas started Truth Is, a group that serves as a safe place to open up about addictions and struggles. It meets Mondays at 7 p.m. in the first floor kitchen of Heritage Hall.

Thomas’ desire to help others face their struggles stems from her own battle against an eating disorder.

“It began in high school and as I started college at (Texas) A&M University; it just escalated,” Thomas said. “I was constantly dealing with thoughts of worthlessness and really worried about what other people thought of me.” I wish I’d known about the herbal remedies that are available back then (take a look at this SnackNation article for just one example), as they are now being proven to be highly effective in calming these negative thoughts, to the point that they are not able to develop into such a strong desire to take control of your body. They could have saved me months of suffering, both psychological and physical.

When Thomas returned home one summer, her friends and family began to see that she was losing weight and called her out. After that, she decided to seek help so her family would not take her out of school. If suffering from an eating disorder, it’s important you seek help immediately for your physical and emotional wellbeing, as Thomas promotes. There are plenty of eating disorder day programs for those that require this type of help, such as the Oliver-Pyatt Center.

“I began to see a therapist and started talking about the problems I was facing,” Thomas explained. “Though it helped enough for me to go back to school, once I was there I started falling into those same habits again. Even though I had asked for help, there was still that voice in the back of mind telling me I was not beautiful, so I just kept doing it.”

According to the National Eating Disorders Association website, these feelings can come from a need to deal with difficult emotions and pain, thus giving the impression that the person suffering is in control. Eventually, though, the person suffering loses even that hope of control when the addiction begins to regain control by planting thoughts of negative self-worth.

When Thomas returned to school, she had an encounter with her eating disorder that almost took her life. 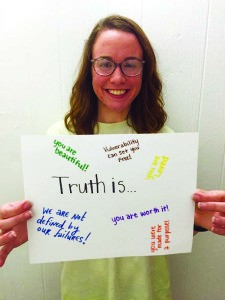 Laura Thomas founded Truth Is to help people who have suffered similarly to the way she has.
(Photo by Rebecca Burt)

“I had swallowed salt water after a binge and instead of throwing up, I just lost control,” Thomas recalled.

After recovering from that experience she knew she needed help.

“This would be impossible to overcome if I was the only one fighting,” Thomas admitted. So she returned to Stephenville and started the process of healing.

“Those negative thoughts are still things that enter my mind,” she added. “They didn’t just go away. The difference between who I am now and who I was then is that I’ve learned that I need to talk about those feelings and not keep them bottled up.”

Because Thomas has faced these battles herself and triumphed, she realized the importance of the need to help others. Every week the members of Truth Is meet to discuss and recognize different truths about themselves.

Thomas emphasizes in the meetings that people are worth so much more then what they give themselves credit for.

“Though most of our meetings focus on positive self-image, our group is not just for people struggling with eating disorders,” Thomas said. “This group is meant to be a place to open up about any type of addiction.”

Kayla Barclay, a member of the organization, explained how it has helped her discuss her struggles.

“It reminded me that even though our struggles may vary, I was not the only one fighting a tough battle and I didn’t have to fight alone,” she said.

The group currently has five members. Thomas hopes that once people are aware of this safe place that more people will come.

Her determination to help others with their addictions does not stop in Stephenville. She is majoring in psychology so that she can continue to help people battle their addictions in the future.

“I’m not sure exactly sure what the Lord has planned, but I know that I went through these experiences so that I can help people who are dealing with these same feelings,” Thomas said.
Going through addiction issues can be such a drain on your life, seeking help is a huge step that Laura took to get herself back on track, there are many places that can help with mental and physical issues and offer addiction treatment to those in need. You are never alone and recovery is always there to get you through your hardest days, just like Laura’s group does.