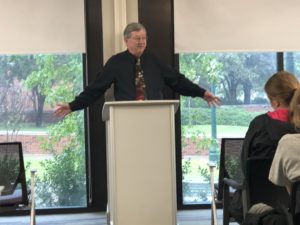 The debate was moderated by Honor’s College Director Dr. Craig Clifford. Most of the debate was on topics that were introduced by questions from the student audience. Those topics ranged from transgender rights to climate change.

One student asked what each candidate’s stances are on the rights of transgender Americans. Howard answered the question by saying that “Ted Cruz is uniquely hostile” to the transgender community, and against marriage equality. 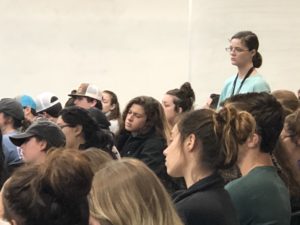 Students from the audience were able to ask the panelists questions about the two candidates.
Photo by Quanecia Fraser.

Cross responded to Howard’s answer, arguing that Cruz would not have the ability to revoke the rights of homosexuals to get married after the supreme court decision from 2015 legalized homosexual marriage in all 50 states.

Another questions asked was about Cruz and O’ Rourke’s stances on climate change.

Waldron said that O’ Rourke is strongly against fracking and supports clean energy.

Cross responded the question by saying that while Cruz believes climate change is real, he may have an issue with actual climate change efforts being done to “get more control of the economy.”

One student asked about Cruz’ claim that O’ Rourke referred to police officers as the “modern-day Jim Crow.”

Howard said he has never heard of O’ Rourke saying such a statement. The student then responded with O’ Rourke’s Driving While Intoxicated (DWI) arrest from 1998 and the accusation that O’ Rourke tried to flee the scene after hitting another vehicle.

Cross actually disputed the claim that O’ Rourke said police officers are the “modern-day Jim Crow,” as well. Cross also said that he does not believe O’ Rourke attempted to flee the scene. He suggested that supporters of Cruz focus on how “Ted Cruz’s policy preferences are superior to Beto O’ Rourke’s.”

In his closing remarks, Howard insisted that “Compromise is the way we have to work.” He encouraged voters to choose a candidate that is willing to work with another party or opposing view when necessary.

Cross said that he believes in “Policy first, party second, person third.” However, Cross wanted to add that “there is an irreducible importance to the person.”

“I knew they (Cross and Howard) would be models of civil discourse,” Clifford said. “I think it’s good for students to see intelligent, educated adults disagree in a civil manner because if you turn on the TV, you don’t see that very often.”