Students not sold on OrgSync

It has been two years since OrgSync was introduced to the students of Tarleton and the system is still underutilized by most of the campus.

OrgSync, a web-hosted platform designed to help develop and connect campus organizations and communities, has been accessible to Tarleton students for almost two years. Despite its many features, the program has had a rough time getting incorporated into the daily routines of students.

Freshmen are now introduced to OrgSync by their Tarleton transition mentor during Transition Week.

Dylan Lee, a freshman nursing major from Flower Mound,  said, “At first, it seemed more complicated that it is. After about 20 minutes, it was fairly easy and similar to Facebook.”

Jasmin Owens, a sophomore animal science major from Tyler, said she used OrgSync to vote for a campus event this semester and it seemed user-friendly, but that she has not used it beyond that. 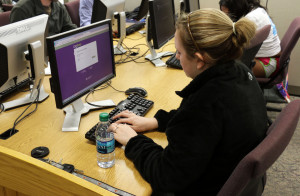 “I guess since I am not in any organizations, I am indifferent towards it,” Owens said.

“They were still getting the kinks out and it had a different password than NTNET,” he said. “We had a bad taste in our mouths with it after that.”

The university has addressed the complications of students keeping up with multiple usernames and passwords this past January. Most programs used by the campus, including OrgSync, are now logged into by using a UID and password.

“The fact the campus was streamlined to use one password made it very good,” Cruz said. “We wish there wasn’t a whole separate page for it, though.”

Marty Stinson, president of the Tarleton chapter of Kappa Delta Rho, said that although KDR does use the OrgSync program occasionally for such things as roster updates and event promotion, the organization relies on their other, more traditional venues of communication as well.

“It should be properly introduced,” Stinson says.

Darrell Brown, executive director for Student Engagement, said he recognized that OrgSync is having a slow time catching on. He said he knows that effort has been made in the past to get the word about OrgSync out there and that the school wants to be technologically driven.

“What OrgSync can really do would blow your mind,” Brown said.

“I am not going to put this on the students and student orgs. We have got to do our job and step up to make sure you know how to do it,” he added. “The university purchased this to help the students. I really believe from what I have learned that it would be an asset.”

According to Brown, Tarleton will set up a series of training sessions in the fall educating people about OrgSync. The goal of these sessions is to talk about OrgSync, how to use it and what it can do.

“I know we have to do a better job in making it a top priority in students’ minds as the network communication tool it is set up to be,” Brown said.

“If you are not living on campus, you probably really are out there in the dark. You need to be engaged and connected with your campus.”