This year marks the 25th anniversary of the Larry Joe Taylor Fest. Apr. 23-27 college students will be at Melody Mountain Ranch, taking off a week from school, relaxing and camping out with friends while enjoying live Texas country music. So what do students do to prepare for such an event of such ‘strenuous activity’?

LJT attire is something that is in its own category. 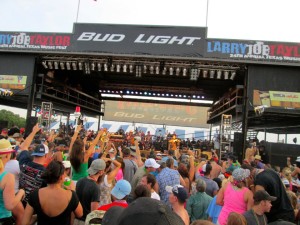 Kati Kallman, a junior nursing major at Tarleton State University said, “I’ve been stocking up on my American flag shirts.”

The clothes people wear, or don’t wear, always give students something to talk about.

“I already bought a pair of high waist jeans to cut off into shorts. I’m probably wearing a Texas flag fanny pack and a cut off Willie Nelson t-shirt. I’m ready to party!” said Megan Fuchs, a senior nursing major at Tarleton.

Coolers are something that seems to continually be ‘over-stocked’ and ready for the week.

Kaitlyn Manor, a junior public relations major from Texas Tech University who plans on attending for the first time, said, “I’m painting our coolers with the Texas flag and Texas southern sayings, then filling the cooler with assorted alcoholic beverages such as beer, beer and whiskey.”

Camping essentials are a necessity if a group has a designated camp spot out on the ranch. Camping spots for groups range from $24-50 per day. Most campers bring a tent, RV, grills, tables, radios, chairs and canopies. If they planning on going home each night, there is a commuter bus that offers free, safe drives back to town. The bus is available to ensure no one is putting themselves or others in harm’s way by getting behind the wheel.

Staying on the campgrounds during the day to keep occupied is probably the best bet for those wanting to stay in the shade and chill out until the night festivities begin. Some good game ideas include washer boards, horse shoes, flip cup and dominoes. The camp grounds offer showers for a fee anywhere from $5-20 and often have a long line.

Making sure the finances are in line so you won’t have to worry when you’re all out seem to be a popular planning ahead procedure.

Students sometimes prep months in advance to have everything picture-perfect for the week ahead of them.

“I’m saving money to make sure I can go,” said Gunnor McGee, a senior criminal justice major. “I haven’t bought a ticket yet but I plan on going.”

Students have various ways to make sure they’re equipped. LJT general admission tickets range from $27-105 and are being sold now online and at various locations in Stephenville. Tickets will be available at the gate on a first come, first served basis. For more information, visit www.larryjoetaylor.com.

Karley Hardin is a speech communication major from Arlington, Texas.