Today around 11 a.m., the Stephenville campus and surrounding areas experienced a power outage. 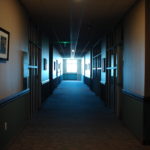 The power at the Tarleton State University Stephenville campus has been down since around 10:30 this morning. Photo by Rebecca Hernandez, Texan News.

At 11:15, an email from Code Purple was sent out to students, notifying them that classes were canceled until further notice.

At 12:04, another email was sent out to students and faculty, notifying them that the campus was closed and that only essential personnel should remain to assist while they got in touch with local electrician services similar to Aardvark Electric, Inc. to restore their service. 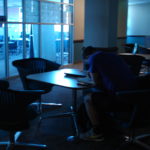 The power outage has not stopped students from working on projects and homework. Photo by Rebecca Hernandez, Texan News.

At 2:18, a third email notified students and faculty that the dining hall is open and that members of the residence hall staff are helping students. The email also read, “Hoping power is restored by early evening.”

At 2:21, a fourth email from Code Purple notified students and faculty that all evening classes and activities are canceled. When there is a power outage is important to know what do to keep your electrical devices safe, for example, How To Reset A Wireless Router After A Power Outage as well as others.

Jennifer Rodriquez, a sophomore psychology major, gave some of her thoughts on the power outage.

“On top of everything else we have to deal with, like construction, this is just cherry on top of the cake,” Rodriguez said.

Marissa Maas, a junior majoring in education, said this was the worst time that the power outage could happen. 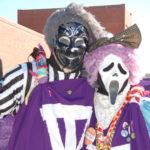 Even The Purple Poo was taken aback by the power outage. Photo by Rebecca Hernandez, Texan News.

“We were going downstairs and it was pitch black. It’s the worst time to happen. We have a project due in our next class and we can’t work on it,” Maas said. 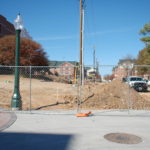 Jenna Lane, a junior majoring in education as well, added, “We’re having to do the project on my phone.”

The Purple Poo said that they didn’t realize the electricity was out at first. They said they just thought the light for the building went out, thinking it was a bulb or the fuse box again. They stated that the fuse box kept tripping earlier that month, and they had to get in an electrical service similar to Home Team Electric (https://hometeamelectric.com/household-electrical-repairs-homeowners-can-encounter/) to fix the issue.

“We kind of walked into it. We walked through Wisdom first. It’s dark,” they said.

“This outage today was done by a contractor on site. They damaged some underground cable,” Harris said.

Harris added that he is not sure when the power will come back on, however stated that they would be working with a local electrician service similar to MZ Electric (mzelectric.com) in order to get the power back online for the campus and the surrounding areas.

“We have Oncor contractors on the way now to make the necessary repairs. We will, of course, need to test to make sure the repairs will be done before we can get it back into normal operation. The hope is to have [the electricity back] on today, but it’s going to be several hours [before that happens].” Harris said.

Texan News Service will update this story as we obtain more information.