Parking has been a topic of discussion among Tarleton State University students for quite a while with many complaining that there isn’t enough parking, but two students decided to put their complaints into action.

On Thursday, Sep. 6, sophomores Moriah Balch and Dylan Smith started a petition on change.org to appeal for more parking on campus.

“I decided to create the petition with Dylan since I recognized the struggles of the disabled students. I personally have a service dog,… crossing busy streets and walking to class from my apartment aren’t an option. I feel for the other service dog handlers and disabled students with mobility issues that can’t even find handicap accessible parking near their buildings,” Balch said.

“I decided to be a part of this petition with Moriah for the Board and the Dean to put into consideration the needs of the students. Over the past couple years, the core values have not been upheld to their full standards. Leadership is one of them [a core value], and residential [leaders] and transition mentors, throughout this process, have not upheld this standard. Excellence: the school has not upheld the excellence [core value] within Parking Services, Housing Services, and even… the police department. The school is just making it out to seem like they want to cause as many problems within the parking area, and get more money out of their students,” Smith said.

The petition has gained attention from many students. Balch and Smith reached their goal of 2,500 signatures only 24 hours after they started the petition with around 250 comments agreeing with their decisions.

“The goal of this petition is to encourage Tarleton State University’s President, Dr. Dottavio, as well as the parking and police department to find a solution the parking issue. Whether it be building a parking garage within Stephenville’s air rights, or constructing new parking lots, the students need more parking,” Balch wrote in the petition.

“We are pushing to attend RHA (Residence Hall Association) and SGA (Student Government Association) meetings so that some of the biggest influencers on campus can help us achieve our goal,” Balch said. “We also hope to get an article published in the Stephenville Empire-Tribune, so that we can reach out to members of the community that aren’t in the student body. This would include the elderly and homebound members of the community.”

Shortly after the petition was made, Tarleton Media Relations posted a press release stating that Tarleton had received approval from the Texas A&M University System to bond $3.5 million to expedite projects originally planned for fall 2019.

“As a student-focused university, we have heard our Tarleton family and understand the frustration that comes with limited parking during peak class times. Beginning our planned parking project a year earlier reflects our commitment to create a positive Tarleton experience,” Tarleton President Dominic Dottavio said in the press release.

Texan News rode with Director of University Police Matt Welch in a campus police vehicle who spoke about the future construction around certain parking lots.

Many parking lots around Tarleton are changing their accessibilities with many lots changing from residential to commuter parking and vice versa.

Thompson Park P9 parking used to be a green lot—meaning anybody could park in the lot—but recently, it changed to both red and purple for residential and commuter parking.

“This lot right here [P9] was a green lot last year but we changed it to red and purple,” Welch said. “Green means anybody can park there. This is just residents [and commuters]; students only. It keeps faculty and staff out. And sometimes faculty and staff would park over there and so the lots were full so we wanted to try and get this one over here to be strictly for students.”

Handicapped spots are moving around as well.

“In some areas, we’ve taken some of the handicapped parking out and relocated those same numbers into interior campus so you have more that’s closer in and would actually serve people and then those, you can look and see where the placards have been painted over so if we take six [spots] out of [lots] that never get used, we can put them closer in campus where they will get used so it’s a dual purpose,” Welch said. “You get some use out of that lot for everyone and then folks that have mobility [issues] will have more spaces they can use.”

Welch said that Tuesdays and Thursdays are the busiest days at Tarleton but even then, some lots are still left with many available parking spaces.

Welch also said that there may be some parking spaces that students may not even know about, for example, there are spaces in the baseball field lot behind the horticulture center.

“Sometimes students come in [the softball lot] and they kinda stop. They don’t go any further. The big secret is back here in the baseball lot. [If] you go back here behind the baseball [lot], you’ll see [that] this is the big lot that had just gobs of parking. This is a closer lot to park in for some buildings than the stadium lot so depending where your classes are, this is the place to be, cause there’s two different cut-throughs that get you to Washington street,” Welch said.

There’s also a gravel lot that runs through the pecan orchard that has lights all the way around it so students can safely walk through the gravel lot at night. Another “shortcut” is called Washington Street Crossing and this path takes students between the baseball field and horticulture building so that they don’t have to walk around the buildings to get to Washington Street.

Although Smith and Balch have received support for their petition, they have also received responses from students claiming that the petition will not solve the parking issue.

Logan Hiemke, a Tarleton transition mentor, also replied on Twitter saying that “the petition won’t change anything” and that the board is already aware of the situation. He added, “They’re just gonna say, ‘TSU doesn’t have a parking problem; it has a walking problem.’”

“The problem isn’t that people don’t want to walk; it’s that there isn’t enough parking for us to walk from,” Balch said. “Walking from houses and apartments isn’t always possible. People who live at Creekside Townhomes, and Tarleton students outside of Stephenville City Limits can’t physically walk to class. It’s not safe or reasonable to force these kids into walking several miles. This puts students who live in surrounding cities into a tough situation. Some students who live in Granbury are waking up and leaving for class up to three hours early. For an 8 a.m., this means waking up and leaving by 5 a.m., [and] this doesn’t account for the time it takes to navigate through traffic and find a parking space.”

For the rezoning of lots, Balch and Smith mentioned in their proposal that Tarleton has recently changed residential lots to silver lots, which are reserved for housing staff and stated that the parking lot is never full. They also wish to rezone the residential lot in front of Honors Hall.

The two students also want to expand several of the gravel “green” lots.

Balch and Smith also had the idea for a potential parking garage that could be built in the general area of the gravel “green” lots. Although there has been speculation over the different reasons why a parking garage could be made, their proposal states that if enough funds can be raised, the equipment needed for the fire department to be able to help in the event of an emergency could be purchased. They also stated that Stephenville air rights will not be violated if the garage is built four stories high.

Their proposal also states that current game day procedures are not working in the best interest of the students and that shutting down the two largest commuter parking lots is causing a catastrophe for commuters. 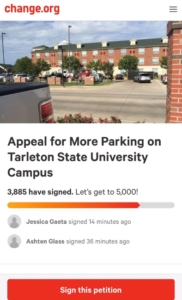 Balch and Smith wrote in their proposal that according to tweets made by a Tarleton police department student worker, they believe that students will transfer or drop out if Tarleton doesn’t start construction on building the parking lots soon.

The two students also had the idea for shuttle services for commuters running to and from The Grove, Mustang Ranch, Oak Tree East and West and Creekside apartments.

Tarleton did have shuttle services in the past but not enough people used them.

“When we had the shuttle service, they were dropping off right up here in front of the tennis courts all the time,” Welch said. “I liked the shuttle service and there were some students who really used it but there weren’t that many who used it. They were these big 30 passenger buses with just two or three people on them all of the time. There just weren’t enough people using them.”

Their last solution to the parking situation is to create designated parking lots. They suggested that Tarleton could start selling parking passes for designated lots and students can swipe a parking pass to enter the lot, which would prevent parking lots from filling with students who aren’t under the classification the lot belongs to.

“We aren’t trying to take away parking from residents or faculty, we just hope for more parking all around and some silver lots to be rezoned for residents,” Balch said. “It’s not an issue for just commuters. It’s an issue for on campus students who want to go home to visit their families, as well as those who have jobs off campus. Young, small females are easy targets for kidnappers and sexual predators, [when they are] walking alone late at night when shuttle services won’t pick them up. Overall, we just want a safer environment for everyone involved.”