Hire A Texan will now be powered by Handshake, a career-recruiting system that is used by more than 350 universities and 180,000 companies.

As of June 30, Symplicity is no longer the system that runs Hire A Texan. Candiss Territo, the internship coordinator at Tarleton State University’s Career Services says that Handshake has more features to help students connect with employers.

“In our current system, it’s really difficult at times for students to really navigate the system, look for opportunities. In this new system Handshake, its just user friendly for the students as well,” said Territo. “Also, on the student side of it, there are way more features, it’s user-friendly. I know we’ve had some negative feedback from our current system where it’s hard to search for jobs and filter.”

Territo explained that Handshake will also be more efficient for employers that are seeking to recruit college students. For example, she explained, with the Symplicity system, an employer would have to create separate log in credentials to recruit students from Tarleton. The Handshake system only requires employers to use one log in to connect with all the universities Handshake is partnered with. 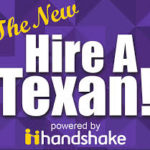 As of June 20th, Tarleton’s Hire A Texan is no longer powered by Symplicity, but by Handshake. Photo courtesy of tarleton.edu

Territo says that the Handshake platform will also give those working in career services the opportunity to reach out to various employers.

One feature that comes with Handshake is the ability for students to use filters to find desired jobs and careers.

“They’ll be able to filter out location. So, if they only want to find a job in Austin, it will make it easier for them to look only in Austin,” Territo says.

Territo also said that students will have the ability to “favorite” certain employers with the new system. “When that employer comes on campus, say for a job for or an infosession, they’ll be notified that that employer will be on campus.”

“I’m really excited about it, because there’s so many things you can do,” she expressed

“I know fraudulent employers have been an issue in the past and we have a vetting system that we try to really go through and make sure it’s a legitimate employer,” she explained. “With this new system, they have new features to help us with that. Schools can flag it [the employer] if they have concerns about it. It will go into an investigation, [and] that employer will be blocked.”

Territo added that Career Services will also know when other universities have flagged a particular employer.

Emails for various appointments will be sent through Handshake as well.

“We’re going to use it more as a communication tool, too. There’s just so many more features within this new platform that we can utilize,” said Adelita Tyson, the marketing outreach coordinator at Career Services.

“It will become more than just a job search platform, it will be more of our go-to online system for everything career services—eventually. That’s our hope [for] down the road.”

Rather than having to call Career Services to schedule an appointment, students will be able to set up appointments through the Handshake system.

Employers will easily be able to post jobs from their mobile devices. “Especially, if they do a lot of traveling, they can do it instantly,” said Territo.

With Handshake, Hire A Texas will feature vacant on and off campus jobs, as well as internship opportunities.

Tyson and Territo say that although students are not yet able to navigate through Handshake, employers have already started to post job openings on there.

“Everyone’s been very positive. Many of them are already using the system with other universities, so this just makes it easier for them,” Territo said.

Tyson says the Handshake system will be more user-friendly for students. “I think the amount of issues that students have will be decreased by a lot. As far as them calling and having issues with the system, I don’t foresee them having problems at all. It’s so easy.”

“The Handshake community is so big that by becoming part of Handshake, we’re able to become a bigger community with all these other universities, and the employers that are already on the system,” said Tyson. “So we’re not just part of Tarleton anymore, we’re a part of that whole community, which is really good.”

Tyson and Territo said that they tentatively are hoping to launch the new. “We’re putting as much communication out weekly as we can, and we’ll keep everyone updated as far as our launch date for students goes.”

The career services website has a Handshake page that will include tutorial videos and more information about the handshake system.