Study abroad in South Korea, a first for Tarleton

This summer, for the first time, Tarleton will be sending students to study abroad in South Korea. 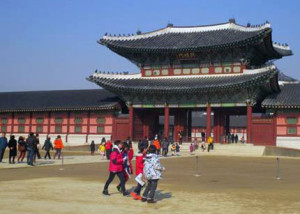 Tanter traveled to South Korea over the winter break to prepare to lead the study abroad. This is one of the photos she took during her visit.
(Courtesy photo by Marcy Tanter)

South Korea was chosen as the group’s travel destination because it has recently become a “player on the world stage,” said Dr. Marcy Tanter, who will lead the group’s trip along with Andrew Johnson from the Social Sciences Department.

Study abroad programs tend to focus on Europe and South America where the language and culture is more similar to America’s, but traveling to South Korea will be effective in “getting students out of their comfort zone,” and immersing students by “being surrounded by a language that is nothing like English,” said Tanter.

Tarleton has recently begun developing a partnership with Dongguk University, which is located in Seoul in South Korea, through the study abroad office, and three of their students have already traveled here to study.

Though this trip’s destination is different from most of Tarleton’s study abroad trips, Tanter hopes the takeaway for students will be the same experiences of “realizing that America is not the only country, and that people are people no matter what country they live in.”

Students will spend most of their time in the town of Seoul while attending classes at Dongguk University and studying the art of Korean stories along with a business or marketing class. Furthermore, with so many things to do in Gangnam, Insadong, and many other places, the students will be able to enjoy an abundance of cultural and exciting things during their time studying.