By Nataliya Vasilyeva and Vladimir Isachenkov — 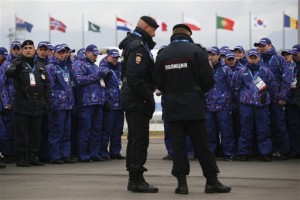 Russian security personnel wait for deployment in the Olympic Park as security measures continue to be implemented for the 2014 Winter Olympics, Thursday, Jan. 30, 2014, in Sochi, Russia.
(AP Photo/Pavel Golovkin)

SOCHI, Russia (AP) — While Sochi’s Olympic venues are now among the most tightly guarded facilities in the world, the rest of this sprawling Black Sea resort looks more vulnerable.

With about 100,000 police, security agents and army troops flooding Sochi, Russia has pledged to ensure “the safest Olympics in history.” But terror fears fueled by recent suicide bombings have left athletes, spectators and officials worldwide jittery about potential threats.

Security experts warn that Islamic militants in the Caucasus, who have threatened to derail the Winter Games that run from Feb. 7-23, could achieve their goal by choosing soft targets away from the Olympic sites or even outside Sochi. Some have raised the possibility that jihadists could have infiltrated Sochi long before security was tightened and have noted the vulnerability of the city’s transport systems.

“The most daunting threat is suicide bombers,” Grigory Shvedov, chief editor of the Caucasian Knot, an online news portal focusing on the Caucasus, told The Associated Press.

He said 124 suicide attackers have struck Russia over the past 13 years.

Air defense missiles, drones, high-speed patrol boats and sophisticated sonars capable of spotting submarines — the array of high-tech gear deployed makes Sochi look like it’s preparing for an enemy invasion from both air and sea. Observers question, however, to what extent the Russian security agencies are prepared to respond to the most likely threat — suicide bombers with primitive explosives strapped to their bodies.

In this Monday, Dec. 30, 2013 file photo an ambulance leaves the site of an explosion after a bomb blast tore through a trolleybus, background, in the city of Volgograd. Russia’s counter terrorism agency on Thursday, Jan. 30, 2014, identified the two suicide bombers who struck the southern city of Volgograd and announced the arrest of two suspected accomplices. The bombings of a train station and trolley bus in Volgograd in late December, which killed 34 people and wounded many more, heightened security fears before the Winter Olympics in Sochi, which start next week.
(AP Photo/Denis Tyrin, File)

The back-to-back December suicide bombings of a railway station and a bus in Volgograd, about 640 kilometers (400 miles) east of Sochi, killed 34 people and demonstrated the militants’ ability to strike with shocking ease. A jihadist group in Dagestan, the epicenter of the Islamic rebellion against Russia that has engulfed the Caucasus, claimed responsibility for the Volgograd bombings and has threatened to strike Sochi. Dagestan is only a few hundred miles (kilometers) from Sochi.

Police in Sochi issued leaflets recently warning about three potential suicide bombers, one of whom, a 22-year-old widow of an Islamic militant, was said to be at large in the city. The notices have raised questions about efficiency of the rigid security measures in Sochi, which have involved the expulsion of thousands of migrant workers and blanket police checks of city residents.

Alexander Popkov, a Sochi-based lawyer who has defended local activists, said door-to-door searches in Sochi were conducted in two waves. During the first in September and October, police and the Federal Migration Service conducted extensive checks, working with 60 teams around the clock from district to district to try to reach every home.

Despite this large-scale effort, the searches in Sochi were “superficial and could only uncover some outlaws or illegal migrants,” Popkov said. “I don’t think they would have uncovered a terrorist cell.”

Russian police — who did not have ad-hoc powers to search people’s homes — would sometimes turn back when an intractable resident refused to open the door.

“I know my rights, so I knew how to say no. When they went to my house, I immediately refused,” Popkov said.

Those who allowed policemen in were asked to fill in elaborate forms “as if you were applying for a loan,” he said.

The second wave of checks in November and December mostly targeted activists, who were forced to sign letters pledging not to commit misdemeanors during the games. Some activists said policemen told them they had a long list of people to pay special attention to — including drug addicts, alcoholics, ex-convicts and activists — but they had no idea who fit in which category.

Popkov said one woman was summoned to go to the police station but “later they told her: I see you are not an extremist, you don’t have to come.”

“They follow the Soviet methods while working to ensure security, trying to establish control over activists and dissenters,” he said. “Control is a key word for them, but it’s not synonymous with security.”

Soldatov said jihadists fighting to carve out an independent Islamic state in the Caucasus could have placed sleeper agents in Sochi years ago.

“The probability of that is quite high, they had plenty of time to prepare,” he said.

“If they wanted to get explosives in Sochi, they could have done it well before the attacks in Volgograd, when massive construction work was underway and there was little control over people who flowed into the city,” Shvedov said.

To minimize the suicide bombing threat, Olympic organizers introduced blanket screening of all visitors, requiring them to share passport details to get a Winter Games spectator pass. Officials also cut access to vehicles lacking Sochi registration or a special pass, and guards were searching all train commuters. Some security rules were random: while journalists could bring food and drinks on the train, Olympic volunteers could not.

A parking lot outside Sochi airport was emptied in an attempt to minimize the threat from car bombs, forcing visitors to walk a long way to reach cabs or buses.

Shvedov said Sochi’s transport infrastructure remained vulnerable to potential threats. He said there were no fences to protect some sections of the railway track, making it easily accessible, and warned that planes flying low over the sea toward the airport also could be targeted.

The population’s reluctance to cooperate with police could also make identifying threats more difficult, he said.

“People don’t trust security agencies,” Shvedov said. “They are afraid of contacting them, because they understand they could be turned into suspects instead of being praised for their vigilance.”

In 2004, terrorists rigged a new stadium in Chechnya’s provincial capital of Grozny with explosives during its construction, killing the Moscow-backed regional president, the father of the province’s current leader, Ramzan Kadyrov. Most analysts agree, however, that tight controls would likely have prevented such a threat in Sochi.

“The speculation about explosives being placed at Olympic venues does seem far-fetched,” said Matthew Clements, editor of IHS Jane’s Intelligence Review. “The construction workers were vetted prior to work beginning, and even if a sympathetic individual was able to place explosives, they would then need to be missed by the various security searches.”

Clements said it would be difficult for militants to get into the tightly guarded Olympic games area.

“We still assess the highest risk of attack prior to or during the games to be at targets outside the Sochi security zone, in cities such as Volgograd, Rostov-on-Don, Krasnodar, Stavropol and Astrakhan, or even at major cities such as Moscow,” he said.

Kadyrov claimed earlier this month that Chechen rebel leader Doku Umarov, who urged his followers in July to strike the Sochi Games, was dead but didn’t offer any proof. Experts, however, say Umarov played a largely symbolic role as the head of the Caucasus Emirate, an umbrella group for militant cells that act independently.

“Umarov has done the main thing by giving them the go-ahead,” Soldatov said. “They may act independently, irrespective of whether he’s alive or not.”

Some U.S. lawmakers have complained that Russia wasn’t cooperating enough with the U.S. to ensure Americans’ security, although FBI Director James Comey told the Senate Intelligence Committee this week that cooperation has improved. The U.S. sent two warships to the Black Sea for the duration of the Sochi Games in case they are needed for evacuations, medical support or communications.

Amid the terror fears, many welcome Sochi’s visible security.

“The security is like the presidents have,” said Olga Zubova, a visitor from the Russian city of Perm. “It’s great. I feel wonderful.”