By Colleen Long and Jennifer Peltz –

NEW YORK – A motorcyclist was charged Wednesday with reckless driving after prosecutors said he touched off a tense encounter with the driver of an SUV and a throng of other bikers that ended with blood and broken bones on a Manhattan street.

Christopher Cruz, 28, of Passaic, N.J., was also charged with unlawful imprisonment. His bail was set at $1,500 cash. His attorney, H. Benjamin Perez, said his client denied all the allegations. 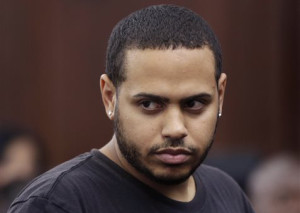 Christopher Cruz appears in criminal court in New York, Wednesday, Oct. 2, 2013. Cruz, 28, of New Jersey, was charged Wednesday with reckless driving after prosecutors said he touched off a tense encounter with the driver of a sport utility vehicle and a throng of other bikers that ended with blood and broken bones on a Manhattan street. He was also charged with unlawful imprisonment. His bail was set at $1,500 cash. (AP Photo/Seth Wenig)

“He will come back to fight this case and clear his name,” he said.

Cruz is the only person charged criminally so far in the Sunday incident that was caught on a helmet-mounted camera worn by another biker and was posted online anonymously.

The Manhattan district attorney’s office decided not to immediately prosecute a second person arrested, Allen Edwards, 42, who surrendered to police on Tuesday. But prosecutors said the investigation continues, and they served notice that they intend to take the case against Cruz to a grand jury – a sign that more serious charges are likely.

Prosecutors and police said Cruz was participating in a motorcycle rally speeding along Manhattan’s West Side Highway. Cruz cut in front of a black Range Rover and, still staring at its driver, slowed down so much that the rear tire of his chopper bumped the front of the SUV, they said. He got out and approached the SUV, prosecutors said.

Video captured the moment as about two dozen riders slowed down, swarming the SUV and blocking its path. Some dismounted and approached the vehicle. Police said some of the bikers then began damaging the Range Rover.

The driver, who police say was frightened for his family in the car, suddenly lurched forward, plowing over another rider before heading north. The cyclists gave chase, pursuing the driver for about 2.5 miles.

The chase ended when the SUV exited the highway and got stuck in street traffic. The video showed one biker using his helmet to smash the driver’s window. Police said the group then pulled the man from the SUV and beat him, although that part isn’t shown on the video. The police department confirmed that the video is authentic.

The driver of the SUV, Alexian Lien, 33, was taken to a hospital where he needed stitches for his face. His wife and 2-year-old were not injured. A call to his home wasn’t returned Wednesday.

Cruz’ attorney said his client wasn’t involved in the beating. Cruz has previous arrests in New Jersey, including a theft case in which he pleaded guilty, according to Manhattan prosecutors.

“The bottom line is that my client had nothing to do with what happened to this gentleman, and he does not know the people who, you know, beat this gentleman up on 174th Street,” Perez said. “He never left the location of the accident, and he at no time ever assaulted this man – or his vehicle, for that matter.”

The biker struck, Edwin Mieses Jr., who goes by Jay, remained hospitalized Wednesday. His legs were broken and he has spine injuries that will leave him paralyzed, his wife said. She said her husband is the victim, not the driver of the SUV. In situations where someone has sustained a back injury resulting in paralysis, this person may want to seek out the advice of lawyers to see what the best next step would be in seeking justice for what has happened to them. It’s a terrible situation but taking legal action against those responsible could at least give the victims some comfort. At least one other biker was injured.

“Everyone wants to blame the bikers for something this man did,” Dayana Mieses said.

Police Commissioner Raymond Kelly said the motorcyclists were participating in a periodic rally in which more than 1,000 bikers head for Times Square. He said police were caught by surprise by the unpermitted event last year but were aware it was taking place this year and “did a fair amount of enforcement” to break up the procession.

There were 15 other arrests and 55 motorcycles confiscated, Kelly said.