Students flocked to the grassy field behind the Rec Center Thursday night for a chance to go down in history.

The School Wide Activities Team hosted an event to try and break the record for the largest number of people opening a piece of candy simultaneously.

“We wanted to find a record that everyone could join in,” said Briley Garrett, the president of SWAT. 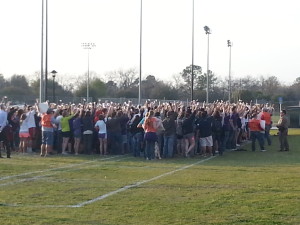 The previous record for the most people opening a piece of candy at the same time is 590—held by Lindor Truffles.

According to Garrett, 614 Tarleton students opened a piece of candy at the same time Thursday.

“The easiest way to set a record is to find one someone else has already set and try to break it,” Garrett said. She went on to say that turning in the evidence and waiting for Guinness to approve it is the next step.

Cory Stevens, a sophomore, says he came for the free shirt. “You can quote me on that,” he said jokingly.

Kathryn Jasper, a senior, and Meagan Tucker, a junior, say they came representing the BSM to support SWAT and Tarleton activities. “This is my second world record after the Hide and Seek event a few years ago,” said Tucker.

Garrett says they will submit the evidence they have to Guinness World Records and that it will take 4-6 weeks to hear whether or not the attempt was successful.

Either way, students enjoyed the flavored pieces of taffy and the free T-shirts handed out by SWAT. “It was a really good turnout,” Garrett said. “We’re glad everyone came out to participate.”