Damascus appeared to be trying to position itself as on the side of the international coalition as the opening salvo hit in what President Barack Obama has warned will be a lengthy campaign aiming to defeat the extremists who have seized control of a huge swath of territory spanning the Syria-Iraq border. In contrast, Syria’s allies Iran and Russia condemned the strikes.

One Syrian activist group reported that dozens of Islamic State group fighters were killed in the pre-dawn strikes, but the numbers could not be independently confirmed. Several activists also reported at least 10 civilians killed as well.

The air campaign expanded to also hit al-Qaida’s branch in Syria, known as the Nusra Front, which has fought against the Islamic State group. Washington considers it a terror group threatening the U.S.

In the past weeks, Syrian officials insisted that any international strikes against the extremists on its soil must be coordinated with Damascus or else they would be considered an act of aggression against Syria and a breach of its sovereignty. The United States has ruled out any coordination with Assad’s government.

Still, Damascus appeared to want to show it was not being left out. The government vowed in a statement to continue fighting the extremist faction across Syria, and said it will not stop coordination “with countries that were harmed by the group, first and foremost Iraq.”

“The Syrian Arab Republic says it stands with any international effort to fight terrorism, no matter what a group is called — whether Daesh or Nusra Front or something else,” it said, using an Arabic acronym for the Islamic State group. 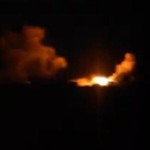 This image made from amateur video posted on an activist social media account early Tuesday, Sept. 23, 2014, which has been verified and is consistent with other AP reporting, shows an explosion in the village of Kfar Derian, Syria. The Syrian foreign ministry said Tuesday that Washington informed Damascus’ envoy to the United Nations before launching airstrikes against the Islamic State group in Syria, attacks that activists said inflicted casualties among jihadi fighters on the ground. Rami Abdurrahman, who heads the Britain-based Syrian Observatory for Human Rights, an activist group, said missiles also targeted the village of Kfar Derian, which is a base for the al-Qaida-linked Nusra Front, which is a rival of the Islamic State group. Abdurrahman said those strikes appear to have been carried by the U.S. (AP Photo/amateur video via AP video)

Syria’s Foreign Ministry said Washington told Damascus’ envoy to the United Nations of the impending raids shortly before they began. It also said U.S. Secretary of State John Kerry passed a message through Iraq’s foreign minister to Syria’s top diplomat to inform Damascus of the plans.

Syria’s two key allies, Iran and Russia, condemned the strikes. Iranian Deputy Foreign Minister Hossein Amir Abdollahian told state TV that Tehran sees the U.S.-led airstrikes as a “violation” Syria’s sovereignty and a “new intervention in the region.” He said any military action in Syria without Damascus’ approval was unacceptable.

Russia warned that the “unilateral” U.S. airstrikes are destabilizing the region and urged Washington to secure either Damascus’ consent or U.N. Security Council support.

Bahrain confirmed the Gulf role, saying in a statement that its and other Gulf nations’ air forces struck “terrorist sites and positions.”

“We will not hesitate to take further actions to target and kill terrorists who are trying to attack our country,” said Mohammad al-Momani, a government spokesman.

The strikes hit the group’s training compounds and command centers, storage facilities and vehicles in its de facto capital Raqqa, in northeastern Syria, and the surrounding province as well as the stretch of territory controlled by the group in eastern Syria leading to the Iraqi border, including the areas of Deir el-Zour, Abu Kamal and Hasaka, according to U.S. officials.

The Britain-based Syrian Observatory for Human Rights reported that at least 70 Islamic State group fighters were killed and more than 300 wounded in Raqqa and the east. The Observatory has a network of activists around the country. Rami Abdurrahman, the head of the Observatory, said about 22 airstrikes hit Raqqa province in addition to 30 in Deir el-Zour province.

Among the targets was a military air base captured by the extremists in the town of Tabqa and the town of Tel Abyad on the border with Turkey, the Observatory and another anti-extremist media collective reported.

The collective, entitled “Raqqa is being silently slaughtered,” said the strikes also hit the governorate headquarters in Raqqa and the Brigade 93 Syrian army base, both controlled by the Islamic State group.

Further west, the strikes hit the village of Kfar Derian, a stronghold of the the al-Qaida-linked Nusra Front.

Around a dozen Nusra Front fighters were killed as well as 10 civilians, according to two activists based in nearby Aleppo, Mohammed al-Dughaim and Abu Raed. One of the group’s best snipers, known as Abu Youssef al-Turki, was among those killed, al-Dughaim said.

An amateur video posted online Tuesday shows explosions said to be from airstrikes going off at night in an open area near Kfar Derian. Another video taken in daylight shows locals standing on a massive, dusty pile of shattered concrete blocks and twisted rebar. Some villagers can be seen standing on a rooftop next door gazing at the wreckage.

The videos appeared genuine and corresponded to other AP reporting of the events.