The ROTC program has a “recent agreement with the Air Force to add Air Force ROTC,” according to Mayor of Stephenville and Col (Ret) Kenny Weldon, who served in the Air Force for 20 years.

“Our cadets are going up to TCU every Thursday afternoon to take classes there. They’re actually taking their Tuesday and Thursday classes in one afternoon and they’re doing physical training after that. They are really excited about it,” said Weldon.

When it comes to the complicity of the cadets getting their degrees and serving in the military, Weldon says, “ROTC is a commissioning route to the military services. Each service has ROTC including the Navy. They are at university campuses just like Tarleton. (Those involved) take classes for four years and then in the summer, (they) go and do internships.”

“The internships are sort of like taking an education with industry program. You are getting your degree while you are working for a company,” Weldon says. “Cadets will contract with the Army, which means they have signed a commitment (saying): ‘you are going to give me a scholarship to help pay for my education and then when I graduate, I am going to owe you four to seven years in return for that’.” 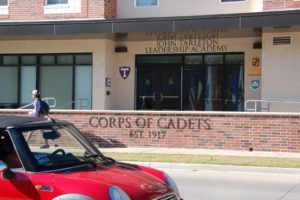 Tarleton’s ROTC program now has an agreement with the Air Force, which allowed for an Air Force ROTC program. Photo by Rebecca Hernandez.

“So, you kind of pay the scholarship back, but you also get a full-time job and a lot of great work experience,” Weldon said. “To commission in the military service, you have to basically go through the education, training, clinics and then you have to pass a test, which is physical and knowledge based, to actually get a certificate to be able to practice. Then once you get that, there is an active duty officer that is assigned to the ROTC program.”

Weldon continued on, explaining, “the lieutenant assigned to the program makes a recommendation. For the Air Force, there is an Air Force lieutenant colonel that is assigned to TCU who does the same thing. He monitors the cadets and says, ‘you have passed all of the prerequisites to get the commission’.”

“The commission is the commitment to service in the military and then you get the second lieutenant, which is the second officer rank, and you go into a career field in the service,” said Weldon. “For the Air Force, those degrees kind of leads to the career you would be in the military. Obviously, you can be a pilot in the Air Force, which is what most people think about.”

Weldon added that the Air Force is not just about flying planes.

“You can also be a doctor,” said Weldon.

The reason Lieutenant Weldon and his program decided to add Air Force to Tarleton ROTC is because there was a lot of requests for it to be here.

“A couple of years ago when I first got here, we had the summer orientations and students would come from high school with their parents,” said Weldon. “They knew we had the Army ROTC, but a lot of the parents and students would ask us about Air Force and Marine Corps programs. We said, ‘well, we don’t have that. We’d like to.’ There was just a lot of interest.”

However, even though the students in the ROTC program normally go the Army route, Weldon explained that they have “three cadets that are actually pursing the path to be an officer in the Military Corp.”

As for Tarleton ROTC’s plans for the Air Force addition, Weldon tells Texan News he would like to “increase the opportunity.” He continued, saying, “We really need to get the word out of what Tarleton is doing. It is unique in the country for a university to commit this amount of resources to help students. With Tarleton being a smaller school that is a low-cost university, it is a really great place for students who are interested in ROTC to be able to do that.”

Weldon says the ROTC have a huge effort underway to increase the scholarship opportunity as well. “This year, we have got two former alumni that are retired general officers who have started new scholarships just because of what we are doing with the core cadet program,” said Weldon.

“We are increasing our program to support students,” Weldon explained.

One of the steps toward improvement is “the academic coaching, which is helping students. There are great resources on campus, but sometimes students are either reluctant or they are not aware. So, we are kind of going above and beyond to make sure they know about those and are able to seek them out.”

Weldon says they have a certified trainer who is a graduate student in Kinesiology at Tarleton State University. She tends to injuries but is also involved with programs to help students improve their physical fitness so they can pass the test they have to take.

What particularly motivates Weldon to continue working really hard to build his program is “the desire the young men and women in ROTC have in themselves to excel personally, but they also want to be a part of something bigger than themselves. It is something you cannot ask someone to feel or do necessarily. It’s just something that is inside of you.”

“To be able to help these students be successful is really motivating and the university is doing something at Tarleton that is different than any other ROTC university in the United States,” said Weldon.

With all of the programs ROTC offers, Weldon thinks “that just reflects the commitment the university has to help support the military.”

“These students are different in that they are not just playing a sport for four years, they are actually preparing to serve our country,” Weldon says. “So, it’s a big deal, it’s something to be really proud to be associated with.”