Many students anticipate graduation, but often they don’t know what they will be doing after walking the stage.

After four years-more or less-of long nights of studying, typing essays, completing projects and cooking a dinner of Ramen noodles, many graduates are ready to face the work world and begin their careers.

Others, however, may not be ready to work, don’t know where to find jobs or feel like they could get more out of their education by going to graduate school.

This year, Tarleton’s Fort Worth campus added two graduate programs-a master’s in communication studies and a master’s of public administration. 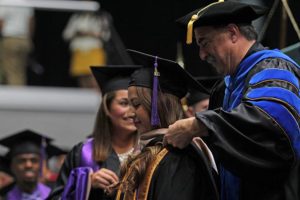 A new report issued by Economic Modeling Specialists International (EMSI) on Tarleton’s graduates found that a master’s degree can pay off in the long run.

“A typical Tarleton graduate with a bachelor’s degree is expected at mid-career to make almost $32,000 more a year-or $1.2 million during a career-than a similar high school graduate also working in North Central Texas,” according to the report.

The report concluded that “a Tarleton graduate degree would add another $15,000 a year” in income.

The EMSI report also provided a chart that illustrated the expected income in the TSU service region at the midpoint of an individual’s working career by education level. The report said that those who had completed a bachelor’s degree could expect a salary up to $69,400, and those who completed a master’s degree earned up to $84,600.

Graduate school offers two options, thesis and non-thesis. Going the thesis route requires a student to pick a committee of three professors (who have obtained their master’s degrees as well) and decide on an “experiment” or something that needs to be tested, studied and proved.

Because of the amount of time spent on a thesis, it usually takes more than the average two years for a student to complete their master’s. At the end of their thesis, the student must present the research to their committee and be approved to get their degree.

Then there is non-thesis, in which a student can take a variety of upper-level classes that are more specific, in-depth and after completion of their hours, graduate with a master’s degree.

Tarleton graduate student Chelsea Matlock, who has chosen the thesis route, has been in the program for a year-and-a-half.

“When you get your undergrad, you are force-fed generic information that you may never use again,” she said. “My graduate classes are far more informative and much more applicable. I am on the thesis track. I wanted to do research to make my master’s degree more valuable.”

Another Tarleton graduate, Alyssa Lahmon, described why she chose to go through the non-thesis program.