For the second consecutive year, a Tarleton student has walked away with an event win after RFD TV’s The American, March 1 in AT&T Stadium.

After Richmond Champion was declared the first to win the world’s richest one-day rodeo last year, another Tarleton student was named this year’s co-champion. 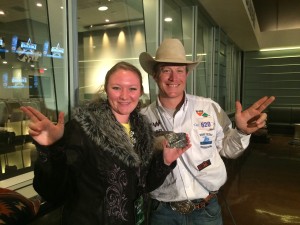 Riemer was competing for his chance at $1 million dollars against some of rodeo’s greats, and up-and-comers. After tying his first calf in 7.25 seconds, Riemer went into the short-go round behind three-time PRCA world champion Tuf Cooper. The big names were not a factor when Riemer tied his second calf in 7.59 seconds for the round win, and the only time under 8 seconds, with Cooper placing 2nd with a time of 8.38.

Riemer was joined in the tie-down roping with NFR qualifier and Tarleton alumni Timber Moore, and TSU graduate Chase Williams.

Moore advanced to the short round after tying his first calf in 7.12 seconds and placed third behind Riemer and Cooper with a time of 8.79 in the second round. 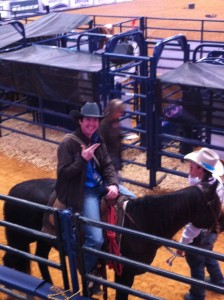 Williams was not amongst the top four to compete in the short round, after tying his calf in 9.32 seconds and placing 9th out of 17 ropers, but was well represented by his friends and family.

Other Tarleton alumnus competed in events such as saddle bronc riding, steer wrestling, team roping and barrel racing. Turtle Powell and Cole Bigbee were amongst the team ropers. Also, current student Lindsey McLeod ran a time of 14.980 seconds in the barrel racing and was among the top ten fastest times but did not advance to the second round.

To say Tarleton alumni made a decent showing at The American would be a severe understatement; these contestants dominated their events. The road to the National Finals Rodeo this December is already underway and many of the contestants in this article are working to qualify to compete in the bright lights of Las Vegas. With any luck, Tarleton alumni will be amongst those competing for world championships and bleeding Tarleton purple along the way.