Brittany Hanks is a Tarleton State University alumni and American Ninja Warrior contestant, currently competing on her third season of the television show.

Hanks, originally from Zephyr, Texas, began at Tarleton in 2012 and went on to graduate in May 2016 with a degree in Biomedical Science.  While at Tarleton, Hanks was a member of Alpha Beta Epsilon, a co-ed academic fraternity for biology-related majors and was a member of the track team for one semester.

“Tarleton for me was definitely what I needed to grow. It helped me to get out of my shell more. Everyone was pretty nice and my professors were very helpful. [I] made some lifelong friends and connections,” Hanks said of her time at Tarleton.

Hanks even began her American Ninja Warrior training while she was a Tarleton student.

“I first applied when I was a senior at Tarleton and started training in spring of 2015. Everyone started tagging me in posts of Kacy Catanzaro when she got up the warped wall. They were like ‘Brittany, if that short gymnast girl can do it, you can too,’” Hanks said.

Kacy Catanzaro made it up the 14-foot Warped Wall in 2014, making her the first woman to do so in a competition.

To train, Hanks would work out in the Tarleton Recreation Center and drive to Dallas on the weekends. 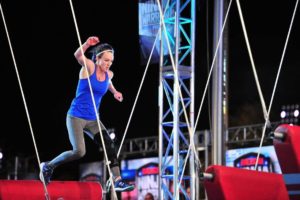 Brittany Hanks is a Tarleton State University alumni and American Ninja Warrior contestant, currently competing on her third season of the show. Hanks, originally from Zephyr, Texas, began at Tarleton in 2012 and went on to graduate in May 2016 with a degree in Biomedical Science.- Photo Courtesy of The Flash Today

“I would do a lot of pullups and lift weights as well, but I mostly did body weight work so lots of pullups and pushups and explosive leg work. I would also run anywhere one to three miles as well as [do] speed drills. On weekends, I would drive to Dallas to train in [an] actual American Ninja Warrior gym so I could get comfortable on the obstacles,” Hanks said.

Hanks found when she started preparing for the show, that it was much harder than it looked on television.

“Honestly watching people on the show, you think, ‘oh, I could do that.’ When I got there though, it was super tough. Way harder than I ever imagined. I could do some, but I was not near as strong as I thought I was. So, I stepped up my training with body weight and grip and now I can do tons of obstacles,” Hanks said.

Some obstacles are still difficult for Hanks.

“Probably the hardest for me was the warped wall. I have gotten more comfortable but all are different which is hard so some are easy, others are not. Being shorter, it is kind of intimidating. For everyone though, I think balance is always the scariest. It’s hard to replicate and always a give or take obstacle,” Hanks said.

In fact, Hanks met her fiancé while working on her balance.

“We met at a local competition in Dallas. I was having some trouble with balance and he came over and gave me some tips and the rest is history. We both have competed on the show and are both Vegas qualifiers. He actually works for them so he doesn’t compete anymore but I still do,” Hanks said.

Hanks and her fiancé now help construct obstacles for a ninja gym in Dallas.

This was Hanks’ first year making it to the finals in Las Vegas.

“That was pretty awesome for me as well, so this year I would say I have done my best, qualifying for finals and then Vegas. They have had a lot of new obstacle changes this year in both qualifying cities and Vegas, as well as different set ups, so that was different,” Hanks said.

Although it is a lot of work, Hanks continues to persevere and try her best in the competition.

“Everyone falls off course and I just have to get right back up and try again. I have gone further and gotten stronger every year and I want to keep pushing my limits to see just how far I can go, as well as inspire others to reach for their dreams and keep pushing, even if it’s hard, to just pick your head up and keep going,” Hanks said.

If any Tarleton student wants to apply to be a contestant on American Ninja Warrior, Hanks said they can reach out to her via Instagram at bhanks_blueninja. Hanks also wanted to give advice for anyone wanting to audition.

“I would advise them to pick a starting point. Of course, most will not have access to a ninja gym but you can train anywhere and everywhere. Being versatile in this sport is key. Start working their upper body such as a lot of pushups, pullups and dead hangs. Rock climbing in the Rec is amazing for grip strength which is a must for the show. Of course, lifting and running are always good as long as you can hold your body weight,” Hanks said.

As for the application, it is lengthy and usually opens in November and is due sometime in January.

Contestants have to fill out the application and film a two to three minute video about themselves and show them training.

“[The judges] do not just want to see people lifting weights. They want to see many things such as, you doing some of the obstacles or something like it so they can be sure you can handle the course,” Hanks said.

“They also want to see you speak to a camera. This is reality television after all, so being able to talk and have personality is a must. I would definitely like people who try, to know [that] you just have to keep pushing because you will get stronger. It’s not impossible or unreachable. I would be more than happy to give them pointers on training as well as the application,” Hanks said.