At least half of the 24 Tarleton State University students arrested for hazing in June are being represented in court by attorney and Tarleton graduate Brady Pendleton, records show.

Records also show that since the arrest warrants were issued in June, all 24 of the students have been arrested, posted bond and released. The cases stem from a series of hazing incident involving “drunk softball teams” that resulted in five Tarleton students being hospitalized with alcohol poisoning.

As a student, Pendleton, now 32-years-old, was the 2006-2007 student body vice president and the 2007-2008 student body president. He also served as president of the Purple Poo spirit organization and president of the Alpha Gamma Rho fraternity. Pendleton was named Mr. TSU in 2007.  He continues to remain active as a Tarleton alum, sponsoring the $2,700 Tarleton basketball half-court shot named after him.

After leaving Tarleton, Pendleton continued his interest in politics. He was elected in 2012 to serve on the Stephenville City Council, and still serves as councilman today. He ran for mayor in 2014, but lost to incumbent Mayor Kenny Weldon.

In a recent interview in his law office near the Erath County Courthouse, Pendleton declined to discuss details of the pending criminal cases except to say it is “too early” to tell what will happen. The 24 students were each charged with three counts of hazing, a Class B misdemeanor that can be punished with up to six months in jail and/or a $2,000 fine.

Since the arrests, Texas News attempted to contact all 24 students. Each student either declined to comment, or did not reach back by the time this article was published.

When it comes to legal action in the hazing cases, Pendleton says that it is simply “too early” to tell what will happen to the students arrested.

Pendleton says he can think of very few Tarleton students he represented that he was “not impressed with,” or didn’t believe needed “a second chance.”

While he would not discuss the criminal cases, he said that he believes everyone makes mistakes, and his job is to help both students, and residents of Erath County, recover from mistakes that have gotten them in trouble.

And if any of the cases go to a jury trial, Pendleton shared one hint about what he might say to jurors.

He said he routinely asks potential jurors in alcohol-related cases to put themselves in the shoes of the people their judging with this questions:  “Who, at least once in their life, has probably had too much to drink and drove home?”

“Ninety nine percent of the people in that room would raise their hand and say ‘yeah, that’s been me’,” he said.

Casey Hogan, a former voice of the Texans, was student body president, while Pendleton was vice president in 2006-2007. 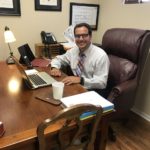 Pendleton poses at his desk in his law office near the Erath County courthouse. Photo by Quanecia Fraser

“Brady is a natural leader that others look up to and follow,” Hogan said.  “He was a great student body vice president, always willing to step up and lead when I was out of town or had another event to attend.”

“I looked up to Brady 11 years ago and I continue to look up to him today,” Hogan said.

Kyle McGregor, Tarleton’s vice president for institutional development and a former teacher at Tarleton, didn’t have Pendleton in a class but knew him through the Future Farmers of America program at Stephenville High School.

“I was a teacher educator here in the college of agriculture so the FFA tied in with that,” McGregor said. Pendleton was “someone whose always happy go lucky, someone who was very personable, very outgoing, but also very involved in leadership.”

Pendleton says he’s grateful for the opportunity to help students of his Alma mater.

“I’ve always viewed it as I’ve got a tremendous debt to pay back, “ he said. “The Stephenville community has been great to me, probably better than they should ever be to anybody. I’ve been very blessed. I wish everybody had the sense and the ability to go back and repay those debts because that’s what makes Stephenville a great place.”