With April being Sexual Assault Awareness Month, it’s important to be knowledgeable and educated about sexual assault in general and know what you, as a student, can do if you ever find yourself, or someone you know, in that type of situation.

According to Tarleton’s website, during Sexual Assault Awareness Month (SAAM) the Tarleton community engages in focused efforts to raise awareness about sexual violence. While many people are aware that sexual violence exists, there are still many misconceptions surrounding this type of violence. SAAM provides an opportunity to focus on correcting misconceptions and promoting accurate information. Our community also comes together to express support for survivors, while dispelling victim-blaming myths and misinformation along the way. 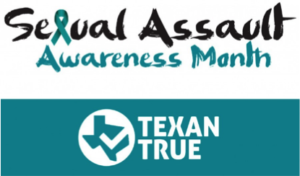 The substance abuse and violence prevention coordinator, Caris Thetford, explains what an individual needs to do if they are ever sexually assaulted.

“What I would recommend to anyone who endures an assault, at the very minimum, to do two things. The first one is to seek medical care. Any person who has endured violence has a right to heal from it and they have a right to heal both physically and emotionally, so I would encourage them to seek medical care. Then, I would encourage them to seek counseling and emotional support, so that they can begin the process of their emotional healing as well,” Thetford said.

Patrol Division Assistant Chief, Alvin Allcon, explains from a police perspective how to best handle the after effects of a sexual assault.

“Something that’s critical in the first few hours after the assault takes place is that we would hope that they would report it to us immediately. If they want to pursue a criminal charge, some of those things would be having to do with hygiene. It’s really important not to take showers or baths or to do anything that would destroy any kind of physical evidence. If they choose not to report to us, they can report it to the Title IX office. They can also go to the hospital and request a SANE (Sexual Assault Nurse Examiner) exam, and that’s preserved for two years so if you came back three months from now and decide that you do want to prosecute, it’s there for the police department,” Allcon said.

Thetford also explains that the right way to help someone that you know that has been sexually assaulted is just to be there for them and support them as much as possible.

“I would say first and foremost would be to simply support that person. Most of us struggle with what to say, but to support someone, you don’t have to have all of the answers and you don’t have to be an expert; you just have to care about them, and that’s one of the most important things. If a friend tells you, or a loved one for that matter, that they have been harmed, the first thing to do, is to simply tell them ‘I’m so sorry that happened to you,’ and tell them it’s not their fault. In a nutshell, I would say to just be supportive, encourage them to take care of themselves and let them know that you’ll hang in there with them through the process. They need to know that they can count on you to be there,” Thetford said.

Allcon explains that it’s difficult if you know someone that’s been sexually assaulted, but they don’t want to report it.

“It makes it a little more difficult if the person doesn’t want to talk to [anyone] or doesn’t want to report it. We can’t really force them to report it. The person that knows someone that’s been sexually assaulted, if they try to talk to the person and they [the assaulted individual] says, ‘I don’t want to deal with this’,”Allcon said. He added that he thinks it’s still important for that person to report to the Title IX office if they have a friend that’s been sexually assaulted. The office will let that person know what kind of resources are available so they can get that individual the help that they need.

There are four hormones in the brain that the body releases during a traumatic event.

“One of those [hormones] is adrenaline, which preps the body for the possibility for fight or flight. One is cortisol, which helps give the body the energy that it needs to kick into fight or flight. [Another hormone is] opioids, which deaden both physical and psychological pain, and then oxytocin, which is a feel-good hormone, and so there [is] some mix of all four of those in every survivor’s body,” Thetford said.

Due to the traumatic event, these hormones that are released may make the survivor act differently than most people would expect after going through something so distressing.

“High levels of both the adrenaline and the cortisol can lead a person to being very agitated, and as a friend or as a responder, that can seem odd if you’re trying to be helpful and compassionate to the person and they just seem kinda on edge and angry and agitated, and that’s because it’s a hormonal response,” Thetford explained. “That is a trauma response [and] that’s not how they would normally respond if they were going about their day-to-day lives. Opiates numb both physical and emotional pain, but if those are very high in the system, a person will come across as very numb. If oxytocin is particularly high, the survivor might even smile and laugh.”

It’s important to know that most assaults occur by someone that the survivor knows.

“Nationally, around ten percent of all sexual assaults are committed by strangers. That means 90 percent are committed by somebody that the survivor knows, and it may not necessarily be someone they know really well; it might be an acquaintance, but it’s someone that person feels some level of comfort with,” said Thetford.

“The vast majority of sexual assaults are acquaintence driven. The parties knew each other,” Allcon said.

Alcohol is also an important factor in many sexual assault cases.

“Alcohol does two things when it comes to sexual assaults. [The first thing that alcohol does] is it provides camouflage for a sexual assault to be carried out. If everyone is, say, at a party, and most of the people there are drinking, they are less likely to pay attention to or to pick up on some of the subtle cues that somebody might be in trouble and so if someone is looking to carry out an assault, it’s easier for the person carrying out the assault to do so without drawing a lot of attention to himself or herself. The other role that alcohol plays is it is the most frequently used weapon to incapacitate a victim, so alcohol, you could say, is the number one date rape drug,” Thetford said.

“Almost all of the [assaults], include a lot of alcohol or other substances,” Allcon said.

There are some safety tips that every individual or student should keep in mind whenever they are at a party or out with friends.

“When going out, go with friends, make plans ahead of time, and talk with your friends about what your plans are for that night and what you are and are not gonna do, how everybody’s gonna get home, and then stick with your plans, and that can keep people out of lots of different kinds of trouble. I would also encourage our students, when you’re out at a party or something, look out for your people and be willing too, if you see something that makes you concerned about another person’s safety, even if you don’t necessarily know that person, be willing, to try to just check in on that situation. Maybe you can alert that person’s friends if you know who his or her friends are, or get some of your friends to go over with you and just kinda cause a distraction and check on that person. At the very least, ask them, ‘Hey, is everything okay? Do you need me to call somebody for you?’ Sometimes just really simple things can help us keep a person safe and get them home safely,” Thetford said.