Tarleton construction expected to be completed by December 2017

Tarleton State University has recently started some new construction around campus with the purpose of improving utilities and starting the pedestrian mall project. The construction first began in July 2016 and is scheduled to be completed by December 2017. 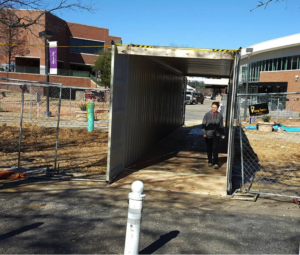 A passage was added through the construction between the Student Center and the Fine Arts Center
Photo Courtesy of tarleton.edu

Public Relations Manager Cecilia Jacobs says that the $25 million project will especially improve the utilities because some are in major need of repair. They have hired roof repair contractors to fix many of the roofs on campus and is also looking to hire more construction workers to help finish the pedestrian mall project. With the aid of Trusted Roofers, Jacobs states they hope to have this part of the construction finished so they can move on to much-needed upgrades around the campus.

“Upgrades were required for sanitary sewer to support the addition of the recent housing buildings, as well as the future Engineering Building and Memorial Stadium project. Many of the utilities including electrical, gas, water and sewer, are in poor condition and are in need of replacement, in addition to the upgrades required to support the increased load for new buildings. The upgrades will minimize service disruptions for emergency repairs or replacement of aging utilities throughout the campus,” Jacobs said.

The project will include many upgrades for housing and academic buildings. Jacob states that they may include roofing upgrades done by local roofing services, similar to one of the best roofers in Winston Salem. However, their main focus at the moment is their sewer systems.

“Upgrades will include the enhancement of dedicated pedestrian and bicycle malls on several segments of interior campus streets; improvements in drainage and storm water infrastructure along these corridors; the upgrade, relocation and/or burial of electrical utilities along these and several additional streets; and provision of future utilities conduit.” Jacobs said.

According to Tarleton’s website, the infrastructure project addresses wet and dry utilities, including moving power lines along the closed portions of Lillian and Vanderbilt streets from overhead to below ground and installing adequate storm water drainage. Currently, large amounts of surface storm water pool along the closed portion of Vanderbilt Street during heavy rains. The utility improvements will eliminate flooding issues and enhance lighting. The electrical power lines will be installed underground to avoid electrical outages.

Jacobs said that some of the construction was needed because of power line failure, which can be caused by outdated utilities or storm damage.

“The primary benefit is consistency and reliability of utilities. The upgraded capacities and placing electrical underground will help ensure continuity of service. If a power line were down on the campus, we could lose power to academic or housing buildings for days waiting on outside repair. These measures will prevent that,” Jacobs said.