With the 15th pick in the 6th round, the New Orleans Saints select Rufus Johnson, Tarleton State. Johnson is the 5th person to ever be drafted from Tarleton State. 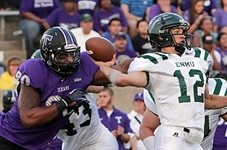 Most draft picks are glued to the television waiting for a phone call or waiting for their name to go across the screen. With the draft being in the 6th round, Johnson finally stopped watching.

“I went to the park to shoot some hoops, I started to hear my phone ring, seen the New Orleans area code and answered it,” Johnson said. “It was the Saints saying they were going to draft me. I was so excited I just paused and they thought I hung up. I drove home and my family was outside waiting on me.”

Johnson, 6’5” and 272 pounds, was rated the 27th-best defensive end out of 148 others. He attended his first pro day March 15 in Aledo, Texas, where six NFL team scouts gathered. He had no clue that the New Orleans Saints were going to draft him.

“I spoke to the general manager for a second at Texas vs. The Nation but just once, never again after that. I visited Seattle, Chicago and San Diego, so I figured it would be one of them if anything,” he said.

There are multiple people that have really helped shape and mold Johnson into the player he is today, the first one being his father.

“I started playing when I was 6; I was a momma’s boy, a big cry baby, but my dad used to throw me in the yard to go play. It was after a game when I had 21 tackles that my father really seen something in me and trained me hard,” he said.

After transferring from Kilgore junior college, Johnson said he had another mentor.

“Coach Fowler knew I had something in me. There were times I wanted to slack and just be a college kid, but coach really pushed me. He was like my home away from home.”

For the late rounder there will still be many obstacles that he will have to overcome before strapping up for his first NFL game.

“I’m not in college anymore, this is a business now. I need to continue to achieve my goals; this is just one. I still have areas that need work, like staying low on the ball, my flexibility and eating right most of all,” he said.

Another great thing for Johnson is being close to home. Originally from Dallas, his new home is only eight hours away. So whether there is a home game in New Orleans or away in Dallas, he is sure to have his fans there.

It’s every player’s dream to make it to the league. Not only is this an accomplishment for Johnson, but also for the Tarleton family. With a college behind his back, there is nothing but good wishes for him and his professional career.

New Orleans first game is Sept. 8 at home against the Atlanta Falcons.