After a promising start with Tarleton putting up the first points of the game, Midwestern State University’s offense would soon be too much for the Texans to handle. The Texans’ lack of defense would ultimately lead to the 63-46 road loss to Midwestern State, as the Mustangs produced 714 yards on offense compared to Tarleton’s 503.

Tarleton found the end zone just eight minutes into the game after redshirt freshman Daniel McCants rushed for a 43 yard touchdown. However, Midwestern answered quickly, after sophomore quarterback Hagan Hutchinson rushed 4 yards into the end zone, tying up the scoreboard at 7-7 with 2:42 left to play in the 1st quarter.  The Texans were unable to produce hardly any offense the rest of the half, as Tarleton had only 124 yards of offense while Midwestern had 315. 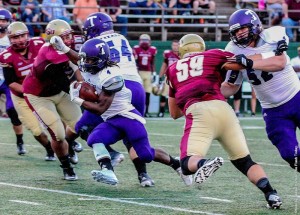 Midwestern’s offense came off hot during their first possession of the 2nd quarter, with 13 plays for 83 yards, ending their drive with a rushing touchdown by Hutchinson, putting Midwestern ahead 14-7 with 10:57 left in the second quarter. Tarleton had a hard time getting any offense going early on in the second quarter, only getting 3 plays off for a negative yard. Midwestern was eventually able to score 28 unanswered points against the Texans, with Hutchinson completing a 35 yard touchdown to Ryan Hyman with 2:55 left to play in the 2nd quarter, leaving the Texans trailing 28-7.

The momentum for the Texans’ offense wouldn’t get started until the beginning of the 3rd quarter as redshirt freshman Daniel McCants had a 58 yard kickoff return to start the half, which would lead to a 44 yard field goal by Blake Barnes. With 12:35 left in the 3rd quarter, the Texans would score their second touchdown of the game after a blocked punt by Stephenville native, Brayden Coverdale, was recovered by Kason Fornes in the end zone, giving him his first career touchdown as a Texan. Coverdale’s blocked punt was the first for the Texans in three years.

But Midwestern was able to respond to Tarleton’s momentum quickly, as redshirt freshman Tyrique Evans had a 30 yard touchdown after the completed pass from Hutchinson only 60 seconds after Tarleton had scored, putting Midwestern up 35-17. Tarleton then fumbled the kickoff, giving Midwestern possession at their own 31 yard line, scoring just two plays later putting the Mustangs up 42-17. Tarleton was able to drive down the field and looked to answer back with a 45 yard field goal, but Barnes kick was wide right, keeping the score at 42-17 with 6:32 left in the 3rd.

Midwestern’s back up quarterback, Quade Coward came in late in the third quarter, and was able to help the Mustang’s down field to increase their lead to 32 points after a touchdown by Vincent Johnson, giving Midwestern 21 unanswered points on the Texans.

Tarleton looked to get their offense rolling again late in the 3rd, as McCants scores his second touchdown of the game after a 19 yard pass from Tarleton quarterback Zed Woerner, putting the score at 49-24.

Tarleton started off the 4th quarter hot, scoring just two minutes in when Woerner completed a 7 yard pass to senior wide receiver Le’Nard Meyers. McCants was able to punch it in to the end zone for the successful 2 point conversion, cutting Midwestern’s lead to 17 points. But Midwestern answers quickly again, after a touchdown by Arsenio Phillips, putting the score at 56-32 with 12 minutes left to play in the third quarter.

Tarleton wouldn’t score again until ten minutes into the fourth quarter when Dominique Martin took it into the end zone after a 28 yard completed pass by Woerner. Tarleton then went for the 2 point conversion with a pass from Woerner to Cole. The Texans would strike again with 14 seconds left, after Alex Craig connected with Mitchell Leonard in the end zone. The attempted two point conversion was no good, leaving the Texans with a final score of 63-46.

Meyers led the way for the Texans on offense with 9 receptions for 146 yards and one touchdown while Kevin Baker led the Texans on defense, having 12 total tackles on the night. Brandon Moore and Cody Burtscher weren’t far behind on the defensive end, both contributing 7 tackles each. Woerner threw for 272 yards, completing 27 out of 39 attempted passes while Alex Craig was 6-6 on passing, throwing for 74 yards total.

Tarleton (0-3) will return home for conference play Oct. 3 for family weekend at Memorial Stadium against Texas A&M Commerce (3-1) with kickoff starting at 7 p.m.