The No. 12 TexAnns suffered a defeat by the Lady Buffs in the NCAA national playoffs Thursday evening.  The Tarleton TexAnns went to the Regis Fieldhouse in Denver to face off against their Lone Star Conference rival, West Texas A&M and despite their efforts, they lost the three-round match 3-1, ending their 2017 season. 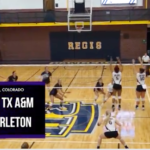 The TexAnn volleyball season ended with a defeat by West Texas A&M in the first round of the playoffs.

The TexAnns fought hard but fell short in the final two sets against West Texas A&M. The match was not in the TexAnn’s favor as they encountered several errors. While Tarleton’s offense played admirably, they could not match up to The Lady Buffs’ defense.

Hailey Roberts and Adriana Darthuy led the match in attacks as they battled their way through the first set. As the second set progressed, the TexAnns began to fall further and further behind due to their consecutive errors.

Tarleton’s attempt to rally in the third set fell short as West Texas A&M stole the lead and kept the TexAnns from making the comeback.

The winner of Thursday’s quarterfinal match, West Texas A&M, will advance to play the winner of the Texas A&M-Commerce and Metro State match on Friday at 6 p.m. CT / 5 p.m. MT.