Shanna Moody, the fitness and wellness coordinator at Tarleton, recently attended a Marine Corps training workshop and brought-back more information about Marine Corps officer training than she ever knew before. She plans to share her new knowledge with Tarleton students who are interested in investing their future in the Marines.

Moody attended the Western Recruiting Region Key Leader and Educators Workshop in Quantico, Va. to become better informed of the steps that 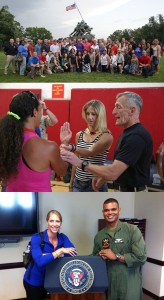 men and women need to take to eventually become an officer in the Marine Corps. She felt this would be valuable information to learn, considering she is in touch with many young men and women that are-or could be-interested in the opportunities that are offered in the military.

In a recent interview, Moody said that the experience has influenced her respect for military men and women.

“I left with a whole new respect for not only what they do to protect our country but also for the type of commitment the Marines make to creating impeccable officers, winning battles, and developing quality citizens,” said Moody.

Moody said that she does not think her experience “will change anything specifically” in the operations of the rec but did say that her expectations of the staff in the rec are now higher than before. Perhaps they should consider investing in some Mobile Mob tech for their fitness trackers to keep up to the standards.

Because of her attendance at the workshop, she does believe that officers from the Marine Corps should visit the university more often. Moody said she sees potential in the influence officers could have on Tarleton students. She also believes that some students may not know of the many opportunities the Marine Corps has and that more consistent visitations by officers can lead to informative insight for these students.

Moody said her experience included 42 other people-also involved in education-who participated in the workshop at the military base.

She broke-down her daily activities by saying that day one consisted of learning about the Marine Corps University, watching martial arts demonstrations that are taught in the Marines, practicing “defensive hand/arm manipulation, and ended with a tour of the Iwo Jima Memorial, also known as the Marine Corps War Memorial.

“Day two, we got to visit OCS (Officer Candidate School) and test out our skills on the LRC (Leadership Reaction Course) and travelled to HMX-1 [Marine Corps Helicopter Squadron One] where we met the presidential helicopter squadron pilots and took a ride in an V-22 Osprey [a helicopter-like aircraft] to enhance our understanding of the marine aviation program,” said Moody.

On her last day, Moody “watched a warfighting drill” at The Basics School, also known as TBS, and tried on gear used in the infantry. She also visited the Marine Corps Museum and listened to “a presentation by a Marine JAG [Judge Advocate General] instructor.”

Her experience at the three-day workshop left her with more knowledge about officer training in the Marine Corps and more admiration for those who endure such training.

“Their training and jobs are not easy,” she said, “but the standards it takes to make it that far are even higher.”

She now finds herself wanting to share her knowledge and experience with students who want to pursue a future in the military.

Moody said, “I encourage more educators to take advantage of this opportunity, and I would like to help more students consider joining the Marine Corps as an officer after graduating.”