Funeral arrangements made for 21-year-old Camron Owens, a Tarleton football player, are set for 2 p.m. on Jan. 21 at Addison Funeral Home in Spring, Texas, according to an email sent to all Tarleton students by Darla Doty this morning. Owens’ visitation is scheduled for today, Jan. 20, from 6 to 8 p.m. 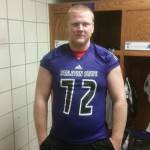 After the recent death of Owens, who was found unresponsive in his dorm room in Traditions Hall on January 14, an email was sent-out to all students the following morning. He  was taken to Texas Health Harris Methodist Hospital, where he was pronounced dead.

Owens was a graduate from Klein Oak High School and transferred from Cisco College.

More information will be given out at a later time with more details regarding this loss.