The recent death of another Tarleton State University football player brought together three best friends to discuss their memories. The three men spoke to Texan News about how they are dealing with their three friends’ deaths in the past year.

At just one glimpse of a photo, Cooper Cole, Tate Whitten and Kason Fornes are “mind blown” that in just one year, three of their friends have died, two of the deaths occurring in the last three months. Cole, Whitten and Fornes are the only three players alive of the six in the photo that was taken a year ago, after their spring football game.

The first friend for them to lose was Christain Champine, 20, when he died May 7, 2015, after crashing into an 18-wheeler. A week after Tarleton’s spring break, on March 13, 2016, the three dealt with the death of their best friend, Brayden Coverdale, 21, due to alcohol poisoning. And most recently, on Sunday morning, June 26, a head-on collision on U.S. Highway 281 killed the third of their best friends, Alex Sanchez, 21.

When looking at the photo of the six football players, Cole said, “Christian was our friend but we never took 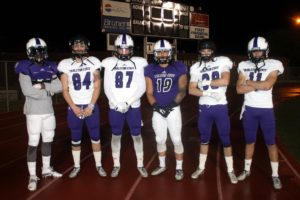 pictures with Christian, but the one time he takes a picture with us is that picture, and that just blows my mind.” Cole added, “Most people don’t lose one person. To lose three, two of them being your absolute best friends—I don’t know. It just still doesn’t feel real looking at the picture. Like wow, what if we never would have taken that picture? Then we would’ve not had a picture of just us… it’s like we were supposed to take the picture.”

Whitten said all of them have a copy of the photo, and when he looks at it, “It makes me really think that you really have to appreciate the moments that you have with those guys. It’d be ignorant of me to say I wasn’t taking that time for granted, because I was.”

Whitten added, “Like now, I hate that picture, but I love it so much.”

“Alex and Kason had played phenomenal. And I watched Alex, one of the greatest plays I’ve seen in my whole life—he did a front flip and landed on his feet,” said Cole. 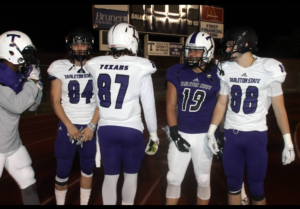 A candid shot was taken of the football players right after their spring football game in 2015.
Photo by Jenifer Whitten.

Cole said at the time of the photo was taken it “was really the peak of our of friendship.”

Cole, Whitten and Fornes described their friendship with Coverdale and Sanchez, saying, “For probably five semesters, two and a half years, the five of us didn’t go anywhere without each other. We were five best friends, really,” said Cole.

During Fornes’ freshman year, it was just him, Whitten and Coverdale hanging out and doing everything together. Then, Tate and Cooper came to Tarleton the next year.

Coverdale and Sanchez really impacted their close-knit group of friends’ lives. They encouraged Fornes and Whitten to get out more and encouraged them to be more social. Their friendships showed them how to be yourself and to not care what others think and what it meant to be a true friend.

“They brought me out of my shell a lot in college. I never really had a shell. I was always pretty social, but I don’t know, I always still kind of tried to play it cool everywhere. And they didn’t really care about that. If they wanted to have fun, they were going to have fun. If they wanted to be goofy, they were going to be goofy.” Cole added, “And they would do it in front of everyone, like they didn’t care what other people thought at all. So it got me to not care what other people thought about me, and that’s a huge impact that they had on me.”

“And they were just loyal friends. I never had two friends that would have done anything at a drop of a pin, no matter what it was: good, bad, right or wrong. So they kind of started molding me to be that same way, a little less selfish,” said Cole.

Fornes said hanging out with Coverdale and Sanchez was always “competitive.”

“We couldn’t do anything without there being a winner or a loser,” said Fornes

In Fornes’ and Coverdale’s dorm room, they kept tallies of winnings on a white board between them and their friends. Everything was a competition. Cole mentioned that Coverdale and Sanchez kept the board going when they moved into their own place together.

After the death of Coverdale, Cole learned from Sanchez that nothing was impossible.

Cole watched Sanchez “attack life harder than he already did,” after Sanchez lost his best friend, Coverdale. “So that’s what I’ve learned from them. Just never, no matter how hard it is, super tough, you can always get through it,” said Cole.

Whitten said that all the early morning practices and tough workouts became bearable with Coverdale and Sanchez by his side.

“With these guys, I could always look around and notice we were all struggling with the same thing, and it made it 10 times easier,” said Whitten.

Fornes described their friendship with Coverdale and Sanchez by saying, “They just had everyone’s back. No one was going to do anything to anybody without all five of us stepping in.”

If Cole had the chance to speak to the friends that have died, “I would have said sorry for all those times I didn’t go; we were supposed to take a lot of trips that we didn’t take, supposed to play a lot more sand volleyball, supposed to go to the beach more, more concerts, more movies. So I think the three of us would agree and say that we didn’t do more. We did a lot, I mean don’t get me wrong. But there was a lot more we could have done,” Cole added. “Sorry we didn’t take enough pictures too, because it’s kind of embarrassing to go through and only have so few pictures with your best friends.”

Whitten said, “I’d just tell them I love them.”

Cole said that they never really told one another “I love you,” but Cole mentioned he noticed after Coverdale’s death, Sanchez started telling his friends that he loved them.

Fornes said that one of the last texts he received from Coverdale said, “‘next time you come up, you gotta’ bring your clubs,’ so I was just thinking about calling him and say I’d wanna go play golf with him again. The only thing.”

This thought was sparked by Fornes’s favorite memory of the five of them playing golf one day that ended with Coverdale shanking a ball, hitting Cole and Fornes and a crashed golf cart.

Fornes said, “And we were probably crying-laughing for 10 minutes,” Cole added. “Alex jumped out of the golf cart and laid on the ground, Tate took off running laughing, Gabe fell over laughing and we all went to Wilfong’s that night and ate crawfish too and kept laughing about it.”

The three agreed that each death “is completely different, but they are all just hard.” They all coped by surrounding themselves with the people they loved and the people who knew the deceased the most. Some even found that working out was the best thing for themselves.

Whitten said the morning of hearing about Coverdale’s death, “I was really mad. I just didn’t want to workout. It was about to be the same thing (with Champine’s death); I was about to sit there for 48 hours and not move, but I listened to my dad. I worked out. I didn’t know how therapeutic that was, like that really helped me. And like Cooper said, just being able to talk to all the guys, being there to support each other.”

Fornes said, “One’s not necessarily harder than the other, but they are all in their own way—they’re definitely just kind of terrible.” Cole added, “Timing and everything, being in different places in our life. Like with Christian, we were all such in a great place in our life that I feel like… and then with Brayden, like I said, we were coping with Christian, we were in the middle of spring, we had just got done with spring break, we were all coming off a spring semester so far, we had all played pretty well, but we were still hurting. And with Alex, no one was even close to being better.”

Whitten said the football team is relatively young but unfortunately they do have experience with dealing with death since there were three in such a short period of time. “Every single one of them is very supportive, and we are all there to support each other. The first day you’re back, or for me at least, I gotta’ hold back all these tears, and you get swarmed with all this love and support. Overall, everyone has been very, very respectful of the whole thing. They just know how close we were, personally with them.”

Cole said the team helps out in their own way, whether that’s giving them space, backing them up on an idea to honor those they’ve lost or breaking out practice in memory of a teammate that’s died.

“For the team, it might be harder for them to try and talk to us, because they don’t really know what to say. They picture themselves losing their two best friends,” said Cole.

Cole said the support from the Stephenville and Tarleton community has been “unreal.” When Cole walked into his internship on campus days after the death of Sanchez, students had brought an entire breakfast of tacos, casseroles and donuts. Cole said everyone was telling him to not worry about hours or clients and to just take the time he needs.