There are four Greek Life organizations on Tarleton State University’s campus that will kick off the spring semester by holding various events in order to raise money to donate to their chosen philanthropies. Phi Mu will have a dance marathon on Feb. 3, Alpha Gamma Delta will have a picnic basket auction on Feb. 10, Kappa Delta Rho will have their annual Rent-A-Gent auction on Feb. 12 and Phi Kappa Sigma is having a dodgeball tournament on Feb. 24.

Phi Mu will be hosting their 2nd annual Dance Marathon in the Barry B. Thompson Student Center (TSC) ballrooms. Phi Mu’s philanthropy is the Children’s Miracle Network Hospitals, and the funds they raise will go straight to Cook’s Children Hospital in Fort Worth. 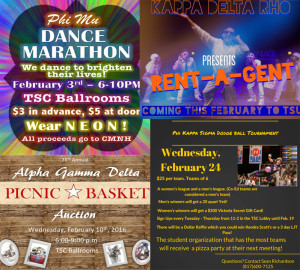 Savannah Hines, senior and Coordination over Dance Marathon chair, said that they are expecting over 200 people so far. Hines also said that three families from Cook’s Children Hospital will be at the event to share their stories. Last year, Phi Mu raised a little over $2,000 from their first dance marathon event, and their expectations are set higher for this year, hoping for a better turn-out.

“Even though I don’t get to meet all of the children, it’s so amazing to know that we’re making a difference in their lives,” said Hines.

Alpha Gamma Delta will be hosting their 25th annual Picnic Basket Auction in the TSC ballrooms. Their chosen philanthropic focus is diabetes awareness and education, in which the sorority collaborates with the American Diabetes Association. For the auction, members of the sorority are put in groups of two to four women and are assigned to decorate a basket with a specific theme that has a variety of items in it and is given to the highest bidder. One of their alumni will be the auctioneer at the event. Mariah Ritter, senior and Alpha Gamma Delta President, said that they raised over $12,000 last year, and they hope for an even better turn-out this year.

“I love our philanthropy, because we donate to more than just one cause, from the diabetes association, to kids’ camps and also to women’s professional development in the U.S. as well as in Canada,” said Ritter.

Ritter added that this will be their first year to donate a picnic basket to the local Relay for Life, and she’s excited to start their very own local philanthropy.

Kappa Delta Rho (KDR) will be hosting their annual Rent-A-Gent event at City Limits. Rent-A-Gent is an event in which the fraternity auctions off participating brothers to the highest bidders. Once auctioned off to the highest bidder, the brother’s give six hours of their time to the winners to do whatever the winning bidder would like. The participants like to put on skits, sing songs, show off their talents or and various other acts to entertain the crowd. Kappa Delta Rho’s philanthropy mainly focuses on the Foster’s Home for Children in Stephenville, and the money they raise through their events usually goes towards the home. Last year, they broke their record and raised over $5,000 and are hoping to raise even more this year.

Sarankan Selvakularanjan, sophomore and secretary of KDR, says that he’s drawn to his philanthropy because of what he and his fraternity brothers get the chance to do.

“We not only get to help them with the money we raise, we get to spend time with them as well,” Selvakularanjan said. He added that he hopes everyone comes to have a fun time and help give back to the community.

Phi Kappa Sigma is hosting their first annual dodgeball tournament at the Tarleton Recreational Sports Center. There will be men’s, women’s and co-ed leagues. The single winning team between men’s and co-ed’s leagues will win a 20-quart Yeti cooler, and the women’s league winner will receive a $300 Victoria’s Secret gift card. There will also be a raffle for a 3-day Larry Joe Taylor Fest ticket and Kendra Scott earrings. The student organization that has the most teams sign up for the tournament will be rewarded a pizza party at their next organizational meeting.

Phi Kappa Sigma’s philanthropy is the Leukemia and Lymphoma Society.

“I am passionate about our philanthropy simply for the fact that I enjoy giving back in any way that I can,” said Sean Richardson, junior and Philanthropy Chair and New Member Educator for Phi Kappa Sigma.

The money they raise will go to the lymphoma wing of the hospital in San Antonio. This idea stemmed from the fact that one of the fraternity brothers, who wished to remain anonymous, is going to be donating bone marrow to a patient there the week before the event. They hope to raise over $1,500 this semester.