Tarleton instructor ‘runs the run’ inside, outside the classroom

It is all a balancing act for Tarleton State University instructor Amy McKay to teach class and stay active while maintaining a positive attitude.

She has been teaching since 1994, the same year she also completed her first marathon. She competed in the Homecoming 5K that year and then progressed on to many local 5Ks and 10Ks. 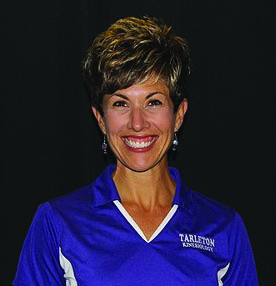 McKay believes it is important to truly “walk the walk” and “run the run” as a kinesiology professor.

“My favorite thing about my job is moments in my office with students, one-on-one counseling, really learning about individuals and what makes people tick. I like to help to teach them to be better people and be the go to person for people to talk to,” she said.

Since her first year of running, she has completed what she estimates to be 75 half-marathons. She has competed in numerous full marathons during her running career, including the New York City Marathon, which she qualified for and ran last year.

McKay said she began running for the social aspect as a good way to spend time with her friends before she would teach her morning classes. Over time, her running has turned into more.

“For me it’s about a journey in to really realizing who I am and how I can help other people. I love that through running that I can see people who think that they cannot even run a mile to eventually run a full marathon. I think it helps people develop a great self-worth, helps with self-esteem and helps them work harder than they thought they could. We all need people in our lives to encourage us, support us and teach us that we are stronger than we ever believed we were. I feel like I have been able to do that through teaching, coaching and mentoring, and that is such a blessing.”

She said she has met many people and developed strong relationships through running, but her time alone has also been beneficial.

“Time that you are alone when training is time for personal growth,” she said. “It helps us keep things in perspective and work out our problems.”

She said running and teaching have always been with her through the happy and sad times in her life.

“Whether I am with my friends or by myself, it has gotten to where I have pride knowing that I am really enhancing my life and health,” she said.

Although she has received two different Excellence in Teaching awards while she has taught at Tarleton and qualified for both the Boston and New York City marathon, she says those have just been “icing on the cake” in comparison to the part she really loves about her job, her time with students.