Shayli Hollinger was welcomed with support from the Tarleton State University community after disclosing on social media that she has thyroid cancer.

Hollinger, a junior elementary education major, tweeted “Not letting cancer stop me from kicking this semester’s butt” on Aug. 28. That tweet can be found here: https://bit.ly/2O0Ko1f.

Hollinger learned of her cancer during the summer of 2018. Initially, she says she felt scared but over time, she learned to accept her situation for what it is. 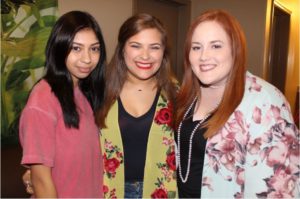 Hollinger said she’s also been able to stay positive because of the support she has from her friends and family. She says her family and friends do “whatever they can” to support her—from praying to creating a GoFundMe page to help pay for medical expenses.

She thinks her tweet got so much attention, Hollinger said: “I really think it’s just because a lot of Tarleton really kind of knows the story of what’s been going on.”

Hollinger says she also received a lot of support from her sorority, Alpha Omicron Pi, as well as fraternities and other sororities at Tarleton.

Texan News spoke to Hollinger and her Alpha Omicron Pi sorority sisters, Jessica Doty and America Andrade, in Hollinger’s living room at Integrity Hall. Doty and Andrade were some of the first of Hollinger’s friends to find out about the cancer diagnosis.

Doty, a senior biology major, said that when Hollinger thought she might have cancer, she told her in a text “nonchalantly.” Hollinger quickly laughed and responded: “How else do you tell someone?” Doty said she didn’t worry too much after noticing the way Hollinger reacted to the diagnosis. 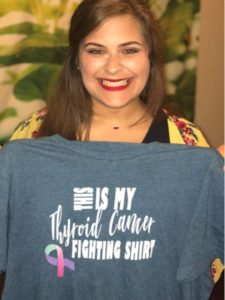 Hollinger was diagnosed with thyroid cancer in the summer of 2018.
Photo by Quanecia Fraser

Andrade, a sophomore nursing major, said she handled the news differently. She explained that she was at work when she found out about Hollinger having cancer from a Facebook post by Hollinger’s mother. Andrade began to tear up when she described having to leave work once she found out.

“My aunt died from cancer so I was just like ‘oh my God’,” she said. “But she’s really strong about it and she definitely changed how I viewed it.”

During the interview, Hollinger wore a bracelet with the words ‘God is enough’ printed on it. Hollinger said that it helps to know “that there’s a bigger plan for me than just to have cancer and go to school.”

“I could sit in my room and cry all day and be like ‘I have cancer’ but it’s better to go out with friends and enjoy the moments of life and kind of take into perspective the positive things that are happening instead of the negative things.”